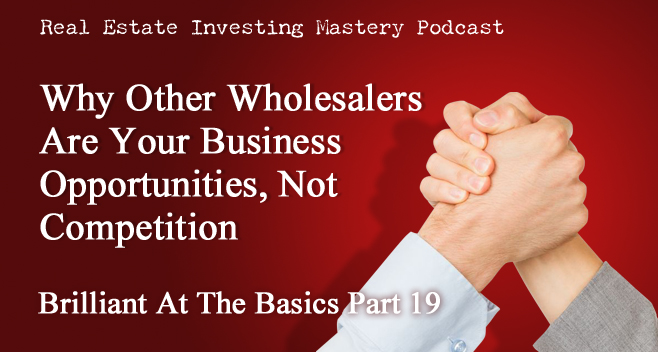 Welcome, friends, to episode 19 of our series that’s all about keeping things simple in investing by bringing it back to the basics.

I’m here again with my business partner and friend, Peter Vekselman, who is averaging 30 deals a month in Atlanta.

In today’s episode, we’re talking about leveraging your time and your efforts through other wholesalers. Instead of thinking of other wholesalers as your competition, you actually want to embrace them because they are a tremendous way to build out your own investor database.

Real simple concept: other wholesalers are not your competition, they are your partners in this biz

Joe:    Hey everybody, welcome again to RealEstateInvestingMastery.com and we are back with another Brilliant at the Basics Podcast series with Peter Vekselman, a good friend of mine. I met Peter three or four years ago through a mutual friend. I think it was Mark Evans. It’s so funny because I remember exactly where it was. I was at one of my kid’s soccer games, a practice at the YMCA in O’Fallon, Missouri. And I was talking… it seemed like for an hour.

And one of the things that you said on there that I’ll never forget was focus makes you rich. And you also said something; I don’t remember if it was on this conversation, but ever since you’ve said this, it’s always stuck with me, “You can never go broke making money.” And I love those two things where if you just stay focused on the simple basic things, you’ll make a lot of money in this business and you can never go broke making money. And so if you hear me on the podcast mention that, I got those two quotes from Peter and maybe Peter stole them from somebody else, I don’t know. But that was a long time ago. That was probably four years ago, Peter.

Joe:    And we’re still friends. I don’t understand it but…

Joe:    Yeah. But Peter runs a wholesaling business in Atlanta. I’ve been down to his office and it’s a really cool operation. He’s got about a dozen negotiators in his office on the phone all day making tons of offers doing a ton of deals. So Peter and I started a partner program. It’s not necessarily even a coaching program; it’s more of a partnering program where we partner with clients all over the country and do deals with them. We set up the systems, we do the marketing, we give them the cash buyers, and we’re even now setting it up where we negotiate with the leads that come in, we do the negotiating for our partners, and partner on the deals that way.

We also lend money and there’s a whole bunch of really cool things that we do. And if you’re interested in getting more information about that, you can get our book or our DVD at FreeBasicBook.com, FreeBasicBook.com and maybe I’ll get FreeBasicDVD.com, and get the book or the DVD. And also, if you go to PeterandJoe.com, you’ll get more information about our program and apply. We’ll get on the phone and talk with you and see if you’re a good fit.

All right. So for this episode, I’m just going to keep it short and sweet. One of the things that really amazed me with Peter when I heard him talk about this a few years ago is how he uses other wholesalers to sell his deals for him. And whatever you want to call it, co-wholesaling or just… You’re just paying guys to do your work for you. I almost said dirty work but it’s not dirty work. They’re just making you money, right?

Joe:    So how does it work for you, Peter? I know you have a big buyer’s list. You blast out your properties to your list all the time just so that it keeps on building credibility, keeps your footprint out there and people know who you are but you sell most of your deals through other wholesalers. Am I right?

Peter:    We do a good portion through that. One of the things that I like to say first of all is that, unfortunately in this business the word wholesaler has a bad connotation with some people. I’ll be working with somebody, let’s say a coaching client, helping them develop the business and one of the things that we’re huge on is promoting relationships. You got to build relationships; you got to have end buyers and all this. And all suddenly, they’ll tell me like, “Well, listen, I got myself 50 buyers and now I got rid of the 20 wholesalers in that list so these are real buyers.”

And so one of the things I tell people, wholesalers are to be embraced. They’re nothing to fear. They’re not a bad entity in this business. So that’s number one. You have to absolutely embrace wholesalers, a very basic concept. And this is something that you hear me talk about all the time. We’re in the business of leverage. So many people in this business get in it to make money, and even when they make money, what they do in the end is they create themselves very… either low or high-paying jobs. So the only way you’re going to get out of that is you’re going to have to start leveraging your time and your efforts through other people.

And wholesalers are a tremendous source of that, of being able to leverage yourself. Because what a wholesaler does, you’re kind of… you’ve marked it and said dirty work but the reality of it is they do the work that we as investors need. They go out there and they put the bandit signs out. They go do all the social networking. They do all the hand-to-hand networking in terms of REIA clubs. They develop buyer’s lists.

So if you got, let’s say you’re starting out this business and you’ve now managed to build your buyer’s list to 10 people or 50 or 100 people, well guess what? Just connecting with one wholesaler could literally quadruple those numbers just like that. So wholesalers are a tremendous way to, if you think about it, build out your own investor database, okay? So not only do we want to not stay away from them. We actually embrace them.

Sometimes that deal in of itself is even more important than how much money they make on that deal, because by just building their name brand out there, most wholesalers are volume guys. They’re not necessarily a deal here, and eight months later a deal there. Wholesalers, true big-time wholesalers, they’re volume.

Peter:    So whether they are making X amount on a deal or 10X, the deal in and of itself, that closing, that notch on their belt, their ability to go to a marketplace and just promote themselves is really… could be argued as the most important thing to them. So we’re just cutting deals with the wholesalers all the time.

Peter:    Now because of the volume that we have here, we could put 40, 50 properties out in the market on a monthly basis. That gets us a lot of ability in terms of negotiating really, really good deals, meaning we’re not going to pay our wholesalers that much for deal just because of the buying we get. But the one thing I always tell new people when you’re just getting started and maybe you are the individual that only has one deal here or one deal there, pay whatever you got to pay.

If you got to split 50-50, split 50-50 with the wholesaler, because again that wholesaler starts giving you access to buyers that you yourself don’t have. And whether you have to pay that wholesaler $1,000 for a deal or 50% of the profit in the back end, which ends up being thousands of dollars per deal, it’s money you wouldn’t have made otherwise, because remember you are still marketing yourself. You’re still developing your own investor database.

Peter:    What wholesalers do is they just increase everything you’re doing. So yeah, absolutely, wholesalers are gold mine in this business. And I think if you’re wholesaling yourself or investing yourself and you’re flipping deals, you got to build those relationships.

Joe:    I think that’s so important. And a lot of times, people tend to look at other wholesalers as their competitors, and I think that’s the wrong way to look at it. You need to look at other wholesalers as your partners, potential partners, because you could wholesale each other’s deals. A lot of times, wholesalers, even though you might think they’re big, they may have a deal they don’t have a buyer for. And maybe you have buyers that are looking for deals that you don’t have deals for.

One of the things we started doing here in St. Louis is creating a monthly wholesalers mastermind where it’s invite-only. You have to be somebody who wholesales deals regularly. And we meet once a month and talk about business. We just talk about how are things going, what’s working, what’s not. You’d be surprised the folks are pretty open about that. This is working well for me. We give each other… Sometimes it’s crazy. Somebody might say, “Listen, how do you negotiate these kinds of deals in this kind of situations?” and then somebody will give them advice.

So real simple concept, don’t look at other wholesalers as your competition. Look at them as partners in this business, and you could use other wholesalers to sell your deals for you. And if you’re doing a lot of volume, don’t think that you have to pay them 50% of the profits. When you’re doing a lot of volume like Peter is, many times he just pays them a $1,000 bucks.

Joe:    And because they know he has so many coming in, they don’t have a problem with that. So anyway, great stuff, Peter. I appreciate it. Thank you very much.

Peter:    Focus on the basics.

Joe:    Yeah, so again, get the DVD, Brilliant at the Basics, and go to FreeBasicBook.com if you want to work with Peter and I. And I’m telling you, we’re talking right now about doing a new book, taking the best of our coaching calls over the last year-and-a-half, two years and putting them into a book format. Those are one of the… It’s one of the highlights of my week actually. Peter always gives me a hard-time because I’m usually really early on these calls. I’m just kidding. I’m usually like a minute or two late and he just rides me like nonstop.

But these calls are really, really good actually, and we get to hear some really important valuable nuggets of wisdom from Peter. Usually, I’ll have one or two important things to say, but then we listen in as what other students are doing deals. And recently, we were talking to one of our clients who’s doing a lot of deals in small cities. He was sharing how he’s doing those deals and I think I’m going to be interviewing him on a podcast coming up here real soon. So anyway, PeterandJoe.com, PeterandJoe.com, if you want more information about working with me and Peter and we can do some deals in your market. All right. Thanks again, Peter.