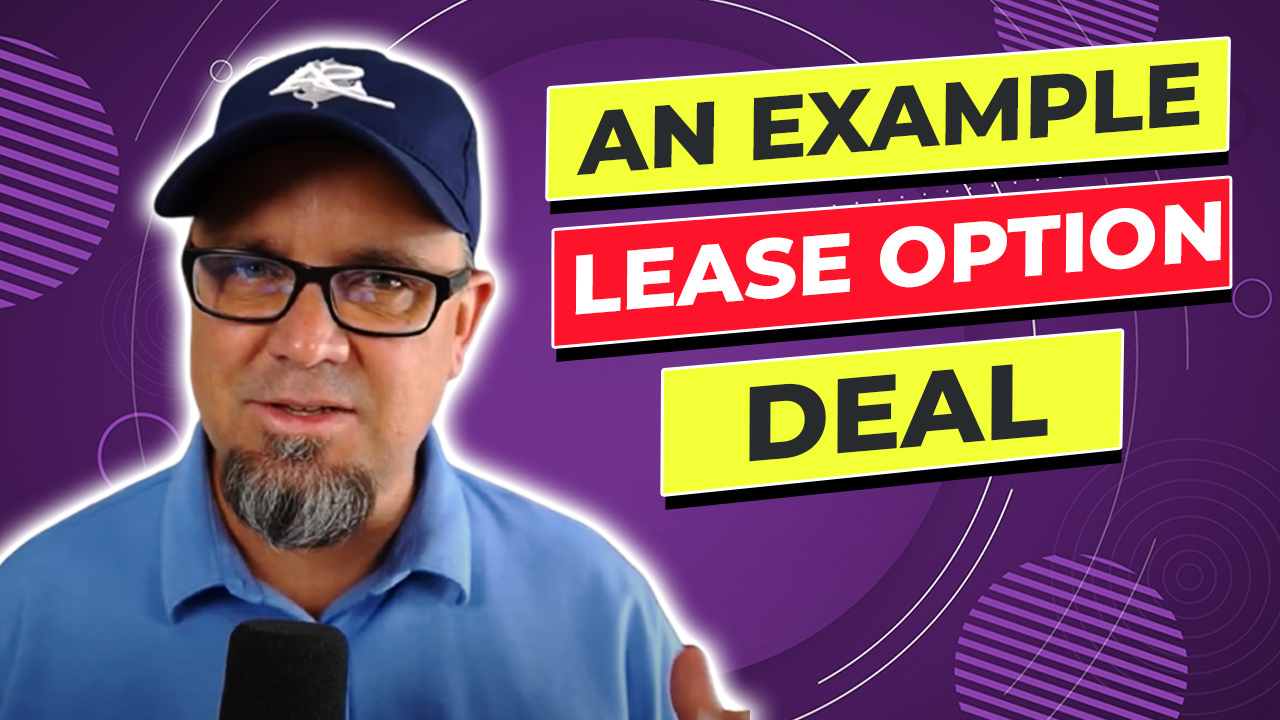 If you started doing one deal a month for the next year, how much money would you make? What would it look like if you could retire with passive income of $5,000, or even $10,000 a month? I’m going to walk you through a recent lease option deal I did in Nebraska so you can see the possibilities that exist even in small towns.

If you’d like to know more about lease-option deals, my webinar Simple Lease Options will teach you everything you need to know, including the three secrets you need to know to make it happen. You’ll learn:

You don’t even need to take out a mortgage or send lowball offers to make these simple lease options work. There are hungry buyers and sellers out there looking for a transaction engineer like you to help out their housing situation. My webinar is going to provide you with all of the tools you need to get started building your real estate portfolio.

Hey, what’s going on? Joe McCall here. And a lot of people wonder, can you show me a real example deal that you’re working on? What does a lease option deal look like? And I’m going to actually give you a very unique example here. This is a deal that we just did a few weeks ago. It’s a lease option deal, sandwich lease option in a really small town of Nebraska. And I’m in St. Louis, Missouri. We did this deal virtually. And I did have a friend who’s a boots-on-the-ground person there.

But let me walk through this deal and kind of show you how a simple lease option deal works. And at the end of this little video, I’m gonna give you an invitation to come to my webinar. But I’ll show you exactly all the steps on how to do these kinds of deals. Okay. This is a real simple deal. This was a nice little two-bedroom house in this little small town of 480 people. Not kidding. It’s about an hour north of Omaha, Nebraska. Little two-bedroom, one bath house on a nice little quarter acre lot. Big tree, has a two-bedroom, one bath. Eight hundred and sixteen feet and solid bones just needed to be cleaned up. And there’s a lot of personal story of the seller that I can’t get into.

But he bought it for two years previously for seventy-five thousand dollars. And it was worth, Zestimates says it was worth about eighty-five thousand. It’s worth about ninety thousand. And he was trying to sell it for sale by owner as a fizbo. For sale by owner. And that’s why we reached out to him. We saw the sign in the yard and when we first talked to him, not very motivated at all. At least we thought. And then as we started talking to a more over the next few days, we realized, yeah, he’s got to sell this thing. But quickly. Right. But he started talking to realtors and we encouraged and he said, you should talk to some realtors, but come to find out. The realtors didn’t want to sell it or listed because he was asking for too much. He didn’t have enough time.

And so he really ran out of options and we were able to really help him get out of a bad situation. So his payments, his PITI was 626 and the property rents for about 950. Now, how much equity does he have? If it’s worth about ninety thousand, eighty-five, ninety thousand and he owes about seventy-five thousand, he doesn’t have a whole lot of equity. Right. But this is what we were able to do. We were able to offer him a lease option. Now I hope I don’t get too complicated here. But I’m going to dive into the numbers real quick.

There’s the A-B and the B-C.. What that means is the A-B is our contract with the seller and the B-C is our contract with the tenant buyer. So we’re gonna stay in the middle of this lease option deal and we don’t need a ton of equity either. This is a great thing about lease option deals. If you’re just a cash investor that buys our wholesales properties at big discounts, you know, you have to get it really, really deep. We only need about a 10 to 13, 10, 15 percent discount.

So what we did is we offered the seller to buy it from him within five years for eighty two thousand five hundred dollars. We’re actually being a little generous there, but we offered to pretty much just take over as mortgage payments, doing a lease option. We paid him six hundred twenty-six a month in rent, which is going to the bank, and we did put down four thousand dollars because he needed the money. It’s a long story, but he we needed to help him and his wife and their little daughter to get out of the house. So anyway, we did give them some money.

But as you’ll learn here in a minute, that money did not come out of our pocket. It actually came from the tenant bar that we put in the house. So before we even finished the signed contract with the seller, we found a tenant buyer really quickly. And this is what we advertised for. We advertised it for sale for ninety-five thousand, nine fifty a month for three years and option deposit of seven thousand dollars. So it’s a very fair price. In three years, the tenant gets to buy it for ninety-five. Now we’re buying it for 82 and we’re selling it for ninety-five. And you’re going to learn in a lease option there’s three profit centers. You get cash now, cash flow and cash later.

It’s really important without using any of your money don’t to go out and get a bank loan. You don’t have to have really good credit and you don’t have to do anything to fix up the house either. So in this example, our cash now is a difference between what we collected from the tenant buyer and what we paid the seller. We made three thousand dollars cash in our pocket. Okay. And then, you know, if the tenant buyer buys a house, if and when we buy the house, you know, we credit that money back. But we also get it credited back from the seller. But anyway, this is money that goes into our pocket, hip pocket national bank, as I call it.

Now, the cash flow is where this deal gets so beautiful, right? We’re getting three hundred and twenty-four dollars a month in cash flow without getting a loan, without buying the house, without taking all of that risk and liability. Three hundred twenty-four dollars a month and over 36 months, that’s eleven thousand six hundred sixty-four dollars in cash flow over three years. Now our cash later is the difference between what we’re selling it for and what we’re buying it for. Which was about twelve thousand five hundred dollars. OK. Our total profit on this deal is eleven thousand plus 12000 is about twenty-four thousand dollars. And how much money did we put in the deal? How much work did we use to fix it up? Did we go borrow private money? Did we take over the mortgage, did we do any kind of complicated owner financing?

No, we didn’t. Right. We’re going to make twenty-four thousand dollars on this deal in a small town of less than five hundred people. A two-bedroom, one bath, eight hundred and some square feet with hardly any room in a little small town. Yes, you can do these deals in. The great thing about doing these deals in small towns is very, very little competition. No money out of pocket right now. Here’s the cool thing. What if you just did one of these deals a month, just one a month for 12 months. How much money would you make? Well, your cash now. Cash flow. Cash later. Right.

Within one year, just from the opposite deposit money, you’re gonna be making about 36 grand a year. That’s from the three thousand dollars on the deposit option. Money that you get sometimes, you know, I can get up to five thousand. Ten thousand dollars. But let’s be conservative. Three thousand a month times twelve months, you’re gonna get thirty-six thousand dollars a year just in the option. Deposit money. All right. And what if over 12 months now you’re getting by the end of the first year, almost thirty nine hundred dollars a month in cash flow? It’s insane.

And then your equity guys, your equity, if you have 12 houses with an average conservative equity in the property of twelve thousand five hundred dollars, you’re going to have over one hundred and fifty thousand dollars in equity by the end of the year. Now, just the option deposit and just the cash flow guys would replace 90 percent of Americans income. I mean, this is phenomenal. Just doing one deal a month. Not bad at all. Now, what if over five years you just had one of these deals a month you would have over a million dollars in equity if you did 60 homes. And the kind of extrapolating this out a little bit, but just one deal a month.

You should be able to do two or three or four deals a month. That I’m sure you ought to do that on the webinar. If you sold half of the deals over a five-year period. So at the end of the five years, you would have 30 properties, right? Your cash flow would be about ninety-seven hundred dollars a month. Your equity, you would have equity of about three hundred seventy-five thousand dollars in the properties that you still owned. And the profits from the deals that you sold. Seven hundred and twenty-four thousand nine hundred dollars. Do you see, guys, how exciting this is? I mean, even if you’re in your 50s and you don’t have any money saved up for retirement, just doing these simple lease option deals could give you plenty of income for retirement.

So what’s the next step? I just want to give you a quick invite to my webinar at SLOClass.com or down below this video, you can click a button SLOClass.com and you can join my webinar. I’m going to show you the three secrets to make this stuff happen. Number one, how to get more seller motivated leads than you can handle for free. Number two, how to talk to sellers and negotiate with sellers and get these properties at pennies on the dollar. Guys, remember here, you only need to get a small little discount to make this work. You’re not trying to beat them down to price at 60, 70 cents on the dollar. OK. You don’t need a ton of equity. So I must show you how to talk to sellers.

Number three, give you the questions, the scripts to use and all that. I’m going to show you how to make simple offers. I have a calculator I’m gonna give you. And then also I’m going to show you how to advertise and find tenant buyers for these houses. Lightning fast. There’s a hungry pool of buyers out there, even in the small towns. OK, so you can do these deals virtually anywhere from your backyard. You don’t have to go see the properties. This is a great, awesome business model. I want you to check it out. Go to SLOClass.com.SLOClass.com. Or click the link below this video. Thanks, guys. We’ll see you.