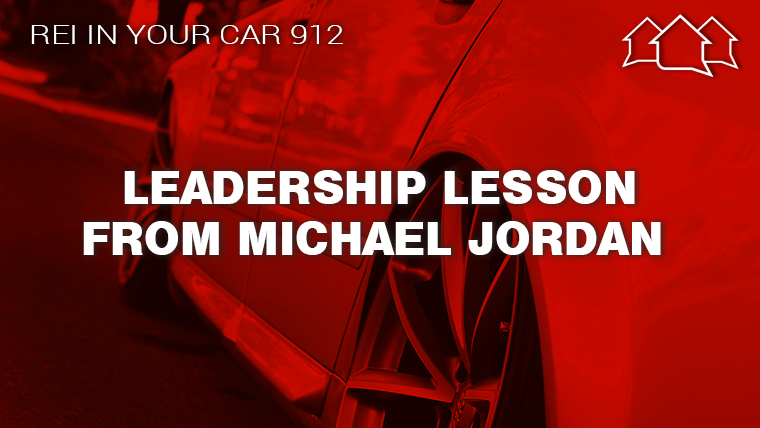 “Winning has a price and leadership has a price,” Michael Jordan says. But are you willing to pay that price? Jordan’s recent documentary “The Last Dance” really inspired me to think about what role leadership played in his team’s success, and I wanted to share some of my favorite takeaways from this movie.

Listen, if you want to be a champion, then you’ve got to work harder than anybody else. That kind of statement seems like a given, but when you listen to Jordan, you realize that he puts new meaning into the word “hustler”.

I’ve had leaders and teachers that I respect, and they were always ones that pushed me hard. There was no easy “A” in their class, and honestly, they were kind of mean. But I learned more, worked harder, and really earned that “A” in the end.

And I got a quick little podcast here for you. Something that somebody posted on Facebook that I thought was really good and it was a quote from Michael Jordan. I don’t know if you have seen the documentary yet. I think it’s ESPN Films called The Last Dance or something like that.

And I was really inspired by it. You know, I’m not a huge basketball fan, but and I was never a huge Michael Jordan fan, probably because just everybody was always so crazy about him. And I didn’t you know, I just never jumped on the Michael Jordan bandwagon.

But after watching this documentary, his work ethic was amazing and his competitive spirit, his competitive attitude, you know, how he had to win?  It’s just, he was a very unique individual. And I really admire and respect him a lot more after watching this documentary. And I kind of wished I would have followed him more when he was playing basketball.

So anyway, I always said when he was playing basketball for the Cubs, that shows you how much I know about basketball. Right. The Bulls. But anyway, this was a quote from him. And I want to read it to you because this was so good. Sweet. Michael Jordan said and he said, look, winning has a price and leadership has a price, by the way.

The reason I’m reading this to you is because this applies to you and it applies to your leadership skills. And if you want to be a good leader, you need to pay attention and study the good leaders of the past.

And Michael Jordan is one of them. Listen. So this is what he says. Look, winning has a price and leadership has a price.

So I pulled people along when they didn’t want to be pulled. I challenged people when they didn’t want to be challenged. And I earned that right, because my teammates who came after me didn’t endure all the things that I endured. Once you joined the team, you lived at a certain standard that I played the game. And I wasn’t going to take any less on that. Good. Now, if that means I had to go in there and get in your A-S-S a little bit, then I did that. You ask all my teammates. The one thing about Michael Jordan was that he never asked me to do something that he didn’t effing do.

All right. So this is what he said. Anyway, when the when people see this, they are going to say, well, he wasn’t really a nice guy. He may have been a tyrant. Well, that’s you, because you never won anything. I wanted to win, but I wanted them to win to be a part of that as well. Look, I don’t have to do this. I’m only doing it because I it is who I am. That’s how I play the game. That was my mentality. If you didn’t want to play that way, don’t play that way.

Has there ever been a better basketball player in the history of basketball? No and there probably never will be either. Maybe. I don’t know. But I was so challenged by watching that little documentary, because I thought, man, am I that kind of a leader?

Do I really want to win that bad? Right. And Jordan knew he couldn’t do it on his own. He had to have a team with him to do it. And so he made them work as hard as he worked. And that’s the thing you got to ask yourself if you want to win. Are you willing to work that hard? Do you or are you the type of guy.

And I’ve been like this before, and sometimes I find myself in the same thing. Even today, it’s like I don’t want to work that hard, but I’ll just hire a bunch of people around me who are willing to work that hard. I’ll make them work while I play golf all day. Well, it doesn’t work that way. You’re not going to be have a championship team.

You’re not going to be the best if you’re expecting everyone else to pull, you know, their weight and you’re not going to pull any weight. So if you want to lead, you’ve got to lead by example. And I think that was the biggest takeaway from that documentary that I saw. If you want to be a champion, you’ve got to play like a champ and you’ve got to work harder than anyone else. And you need to take it more seriously than anybody else. And that means getting in people’s faces and pushing them.

You know, like I look at leaders that I’ve admired and respect, that I have worked under in the past and even teachers in school and college, you know, like the ones that really pushed me the hardest were the ones that I have the most respect for my math teachers, specifically in engineering school, when I was, you know, taking advanced math, calculus and stuff at community college and at the University of.

To those teachers that pushed me hard and were frankly mean, didn’t let me just because they were because I was nicer because I was a good boy. They gave me good grades. No, I mean, I would get an F. if I didn’t pass the test. Right. There was no curve. Only five, 10 percent of the class even passed and passed and went on to the next level of math in these classes. Right. So it’s wasn’t. Nothing was on a curve.

So anyway, my whole point is. What kind of leader you’re going to be? What kind of standard are you going to hold yourself to and your team to?

You can’t hold him to a higher standard than you’re gonna hold yourself to. No, I’m not saying that you need to be, you know, working 15 hours a day. I’m not all about the hustle. Right. You need to give your team time off. You need to take time off. You need to play some golf once in a while. But, you know, when you are playing golf and I’m saying that because I’ve been playing a lot lately, you need to make sure that you’ve at least put in the work beforehand. So when your team is now working for you there, you’ve got you’ve already put in the work. Right.

And so even when I am playing golf, I still work 40, 50 hours a week. I’m still making calls on the golf course, which is I hate doing that, but I still sometimes do. So anyway, check that documentary out. It’s called The Last Dance by about Michael Jordan and the Bulls.

I think it’s on Netflix or Amazon Prime. And I’m pretty sure it was put on by ESPN was really, really good at encouraging guys. Go check it out. I gonna do another podcast here about another show I watched called I Quit. And I don’t watch a ton of TV, but just in the last since the quarantine kind of happened with my son.

You know, we’ve been watching a little bit more TV. But there’s a show called I Quit and I’m gonna do another podcast episode about that. So we’ll talk to you guys later. Hey, listen, if you want my book, I talk a lot about these kinds of things in a book I wrote called REI Secrets. And if you go to REISecrets.com, REISecrets.com, it’s a free plus shipping book.

You’ll get it for free. Just pay a little bit of shipping. And I have in their daily nuggets of real estate investing wisdom and little things like this that can help give you maybe a little inspiration or some food for thought and help you get more leads, do more deals in your real estate business. Cool. Go check out the book, REISecrets.com. We’ll see you guys later.