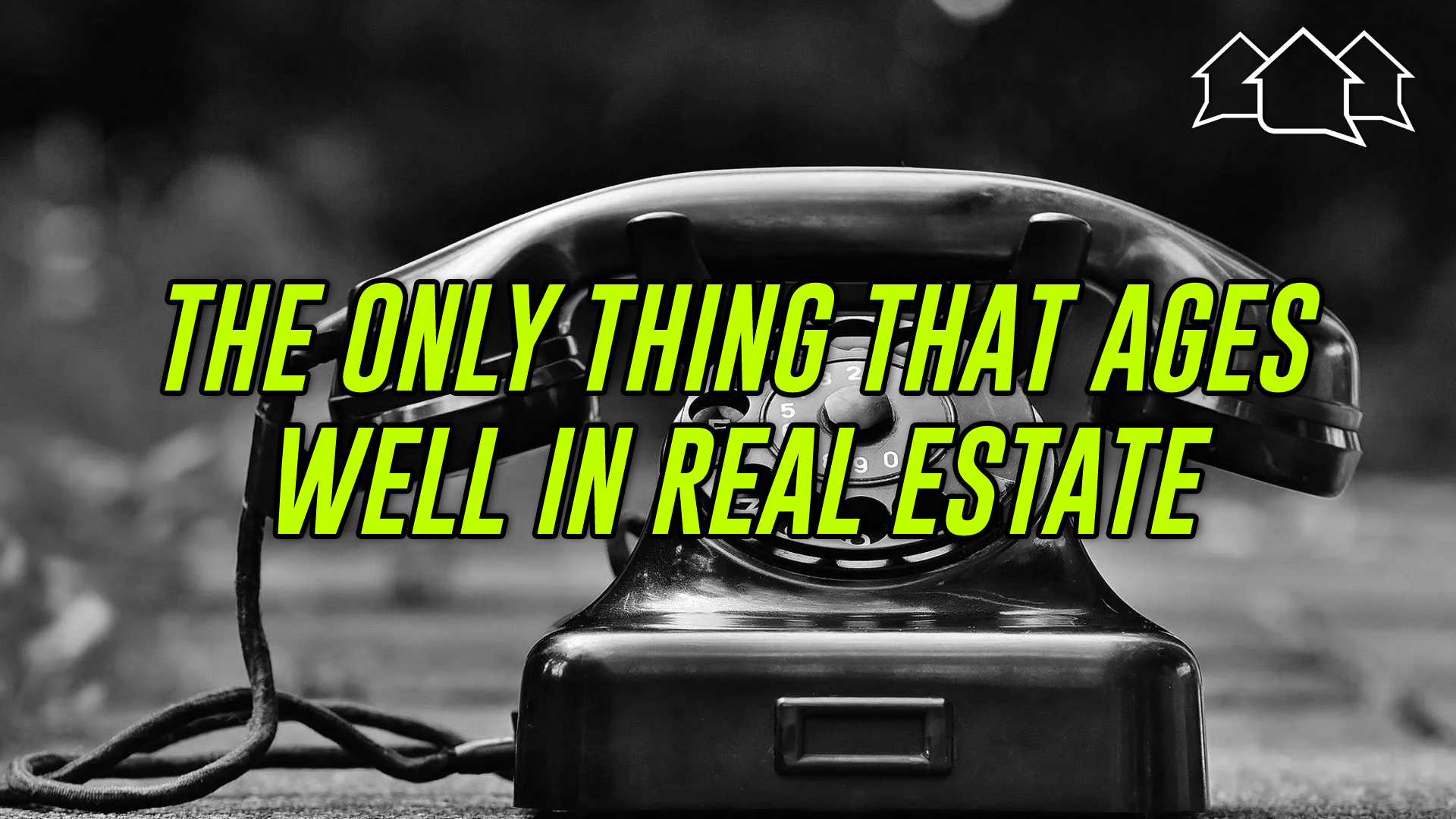 Some things stink pretty fast, like dirty diapers or overcooked broccoli. Leads, however, get better and better with age. If you want to truly be a real estate investor, you have to fully commit to chasing down your leads.

Your leads need to be followed up on. You need to follow up on your follow-ups. You should have a CRM full of notes about how many times you called and talked to your leads because it takes an average of 2-3 months to make that sale.

I would say that it’s 65%, maybe even 95% of all of my sales that come from following up. It is going to be incredibly rare that you’re going to find someone willing to sell you their house for 60 cents on the dollar on your very first phone call.

So if you’re going to be in this business, you have to give it a solid six months of your time, and you have to absolutely commit to following up on your leads. No lead is ever truly dead.

Nurture your leads. Follow up on your leads. Don’t give up on them because old leads just get better with time.

Hey guys, Joe McCall, Real Estate Investing mastery podcast. What’s up? Hey, I’m actually talking to you right now from the living room in our carriage house. My office is upstairs. I’ve got a coaching call. It starts in seven minutes and I was thinking of something I want to talk to you about that I think is really important. And bear with me here as I kind of explain this. The other day, we had some broccoli that got old in the refrigerator and man, something stinked stunk real bad, right? Stinked stunk. What’s the past tense of stink. Stunk. All right? So it’s like stunk really, really bad and it was in a container or something, right? So I’d said to my, I mean, what do I do when something needs to be done in the kitchen? Hey boys, I call my boys, they’re 16 and 14. I have them come clean the kitchen or whatever.

And so what my son did, one of them, I won’t say who, but he’s the older one. He he put the broccoli down the garbage disposal and forgot to turn the garbage disposal on, right. So I, I leave to go somewhere and I come back and the whole entire house smells like 20 year old dirty diapers. It was like the worst thing I’ve ever smelled before. What’s the past tense of smelled? Smell. Smelled. Okay. It was horrible. Okay. Like you, it was like there was a bunch of dead animals in the house and dirty old poopy diapers, like 10 years worth of diapers. Oh, I couldn’t believe it. I was so mad. It was horrible. And it was really cold outside. But I opened all the windows anyway and we turned the garbage disposal on. Okay. All right. So bear with me here. I told you at the beginning, right?

Bear with me. There are certain things that get better with time. All right. Wine is one of them. And I got one other thing I’m gonna share with you, but what doesn’t get good with time? Well, broccoli, creamer, like I’m just made a coffee. I put some cream in there. I had to throw some of the old cream away because it started to stink and so I got some new cream. Right? You know what else gets better with time though? What gets better with time besides wine? You want to know what it is? It has to do is real estate investing. That’s why I call this podcast Real Estate Investing Mastery podcast. All right? You know what it is? It is leads, leads, seller leads, seller leads get better with time. Oh so much better. And here’s the crazy thing. If you look at your numbers, if you look at the numbers of anybody who has ever been active in this business, doing a lot of deals for a long time, you’re going to find one thing in common.

Most of their deals come from follow up. Okay? And I would venture to say in most businesses it’s 65, 75, 85% of their, a lot of my deals, almost a hundred percent come from followup, especially when you’re doing lease options, right? And you’re just not going to find, it’s very rare to find a seller on the first call who says, yeah, I’ll do, I’ll sell my house at 60 cents on the dollar. I’ll do a lease option and wait two years till I sell it. Like nobody wants that, right? Everybody wants full price, and so it’s really, sellers are really, really good at hiding their motivation, but you know what? No means, no means not yet. When it comes to real estate, when it comes to this business, you’ve got to, if you’re not doing the followup, you’re crazy. All right. I mean, your, your, your business stinks if you’re not doing followup because the older your leads get, the more leads you get to follow up with, the more likely you are to be doing deals with those old leads.

All right, so don’t throw your leads away. Don’t throw them in the woodpile and just hope that maybe someday they might call you back. Like you’ve got to follow up. If you look at the numbers on average, again, like I said, 75, 85% of your deals are going to come from follow many times much more. And how much follow up? Well, two or three months on average is what I see in my business. What I’m coaching students and people that I know that are doing a lot of deals, two or three months of follow up, five, six, seven touches of follow up. Guys, nobody is doing that. Nobody but like a few people that are doing a lot of deals, they’re doing it. One of the biggest reasons why beginning investors fail is they quit too early, right? They send 20-30 offers and just give up. Oh, it doesn’t work.

But did they follow up with any of those offers? No, they quit and gave up. So guys, if you’re not in this for the long haul, if you’re not in this business for at least six months, then forget it. Just save your money, pack up your stuff and go home. Like don’t worry about it. Like just save your money and your time and your resources and your relationships and your energy. And do something else. Stay with your job. Like there’s safety and security in that, right? You’ve got to be committed to this business for the long haul. Every lead that comes in, you have to follow up with them and you need to be willing to follow up with them until they do sell the house to you, or they sell it to somebody else. You need to be willing to follow up with them for five, six, seven, 10, 12 months.

You need to be willing to follow up with them every single week if you have to, every single month at a minimum every 30 days. You understand what I’m saying? One of the, one of our, my favorite coaching students ever is Melissa and now we’re doing a bunch of deals with her in Alabama. Her and Gavin Timms, my coaching business partner, and one of the reasons why he wanted to start working with her is she was kind of a reluctant investor and it’s, she tells a story. It’s kind of funny. Her husband kind of wanted to do it, kind of dragged her along and she didn’t really want to do it, but he wasn’t keeping up with, I guess you could say. And so she like got involved cause she’s like, all right, I’m going to do this. And she’s like she’s an animal. She just gets at these leads and she’s, she was doing deals but wanting to do more.

Gavin was talking to her one time and, and I can’t believe I called Melissa an animal. Melissa, if you’re listening to this, I’m sorry, that was a compliment. All right. But anyway, Gavin’s talking to her and he’s, and they were talking about a lead that just kind of was not motivated. And Gavin asked her, she said, well, what are you going to do with that lead? And she says, well, I don’t know, but I’m going to call him and tell he does sell the house either to me or somebody else or he dies or something like that. She’s like, I don’t know, but I’m going to follow up with him. And we knew immediately, bam, Oh, that’s somebody that gets it. That is somebody that gets it. And so Gavin then asked her, he said, well, and he saw that too. And he says, immediately well what if we did a bunch of marketing for you and gave you a bunch of leads?

Would you like to partner with us on some deals? And she said, yeah, of course. And so because I mean they’re doing tons of deals and it varies. It fluctuates up and down, you know, five to 10 deals a month, some months less, some months more. But there is one simple reason why their follow up, they are good at follow up. And if we were to show you the CRM, you’d see all kinds of followup notes in there. Every single deal you do. We do. We look at the notes and there’s lots of followup on average again, two to three months, six to seven touches. All right, so I got to go on my coaching call starts right now. I got to go. What’s the number one thing that I’m trying to get? What’s a big takeaway from this? Again, there’s only one thing in business that ages well, and they’re old leads. Okay? So take care of your leads. Nurture them. Take care of them. Like, be nice to your old leads cause that’s where the money’s at. follow up with your old leads. Never stop. Never, never, never stop. We’ll see you guys take care of, Hey, if you want my book, go get it. Reisecrets.com. It’s free. Reisecrets.com. See ya. Bye.