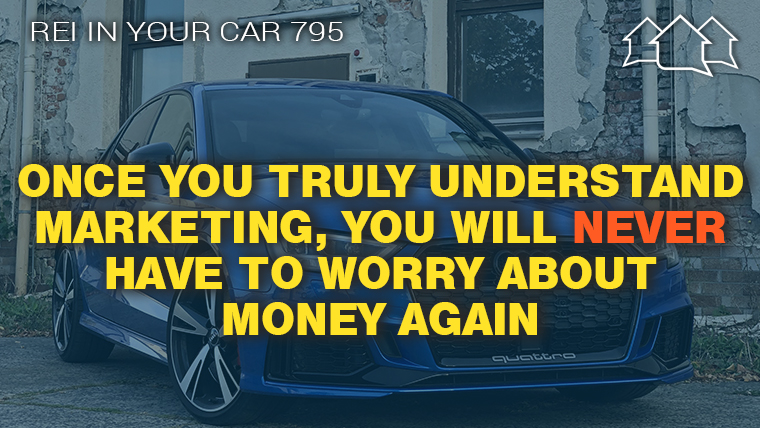 Hey folks. I’m driving around in my neighborhood now. I’m opening the window because it’s such a beautiful day.

I want to remind you that there’s a lot of opportunities out there for real estate investors. On social media, there’s been a lot of complaining lately that states just the opposite.

Please be careful and limit your exposure to that kind of negativity. People who have time to be on social media like that aren’t doing the work to take advantage of the opportunity.

Unfortunately, some people get stuck. They are students of real estate investing, but they’re not investors. You have to throw yourself at it and take massive, imperfect action.

I was on someone else’s podcast the other day. The host reminded me that I’d made an impact on him several years ago by saying, “If you learn marketing… if you learn how to get leads, you will never have to worry about money again.”

That message stayed with him. He started working and using what he’d learned about real estate investing and became a success at it.

When I say there’s opportunity, I mean there will always be motivated sellers and buyers. Think of the market like fishing. Study the market. When is it best to use this tactic or that one? When are they biting? When are they not?

Stick with it. Fishermen continue to go to the same lake. They may use different bait and lures at different times of day or in different weather conditions, but they continue to learn with each attempt.

Hey guys, Joe McCall. Good morning! Top of the morning to you. I’m driving around just in my neighborhood. It’s a beautiful day. I’m going to roll down the window a little bit even right now, and I wanted to talk to you about something that is pretty cool. I talked about it, I touched on it a little bit in my last podcast. There is a lot of opportunities out there and people are nervous.

You know, the market is changing. It’s funny too, social media kind of stokes everybody’s fears. They, you know, they read a lot, they study and read actually a lot more than they actually do. And you gotta be careful with that, right? Like, you need to be careful about how much attention you’re paying to public discourse, right? Everybody’s going to find something to complain about. Everybody’s going to whine. Not everybody, but you’re, if you want to find the whiners and the negative nannies, you’re going to find them negative nanny. Is that the right thing?

But, so here’s the cool thing. I was being interviewed on a podcast the other day and the guy said to me something, he said, Joe, you don’t remember, but a few years ago, four years ago, he said, you said something that had a dramatic impact on my business, on my life. And I thought, wow, really? That’s cool. What was it? He said, Joe, you said, if you learn marketing, if you learn how to get leads, you will never have to worry about money again. Hold on a second as I turn around here and I’ll let you chew on those words there for a second.

If you understand marketing you know how to get leads, you will never have to worry about money again. And I want to tell you guys like, man, I was talking about this last podcast I did. There’s so much opportunity there, it’s not too late to get involved in real estate. It’s not too late to get in the game and start making money. Doesn’t matter how much quote unquote competition you think there is out there. It does not matter at all what direction the market is heading. If it’s going South, if it’s going North, if it’s just flat, it doesn’t matter. What matters is you and your mindset and you thinking whether you can actually do it or not here and here’s why. Here’s why:

You know, so like they’re students, right? And they’ve got lots of different lines in the water, they try different baits, they try different things and you’ll find some marketing works better at other times then… So, it’s kind of like a pendulum, you know, direct mail was working really, really well a few years ago. And then everybody started doing it and it doesn’t work as well anymore. Maybe… Because now actually I’m seeing a lot more people doing direct mail and actually starting to get good results because fewer people are doing it and sellers are starting to get more motivated.

So, you need to be a student of marketing. That’s my whole point. You need to be a student of marketing, figure out what’s working, what’s not. You know, cold calling is still working really, really well even though more people are doing it. But just the other day a guy came to me and said, Joe, I’m doing cold calling. And he just got started a couple months ago and this is like after everybody’s doing cold calling, right? Like everybody’s doing, trying to do deals in this market. It’s so competitive. It’s so hard. This guy comes in the scene just a couple months ago and is crushing it right now. He’s done like five deals in the last couple of months just by picking up the phone and making phone calls. So, marketing like… and now I’m starting to see direct mail come back. Right?

Because when you understand marketing and you know how to get leads, you’re going to do deals. You’re gonna make money. Cause we’re not in the real estate business. We’re in the marketing business. So, you need to be a student in marketing. You need to do whatever you can to make sure that your pipeline is full of leads and then you will do deals. It’s like almost impossible not to. Right? So that should be your number one job, right?

Your number one job should be marketing, getting leads. That’s the last thing you outsource. If you outsource anything, it’s just, okay, this is the marketing that I want to do. All right? Then hire somebody to do the mail or hire somebody to send the texts. But, yeah, you got to drive that ship. You need to be the captain in charge of the marketing. Forget about dispositions for now. Okay? Like that’s important. Selling your properties. Yeah. But it’s not as important as getting your pipeline full of leads.

There’s a lot of podcasts out there… You know, one of the podcasts I love, I’ve not listened to it in a long time, and it’s the I Love Marketing Show by Dean Jackson and Joe Polish. There’s also, oh my mind’s running blank right now, but there’s a lot of good marketing podcasts… Duct Tape Marketing is another one that you should listen to. I’ve thought about starting a marketing for real estate investors podcast for the longest time, but I just got this one. I don’t need two of them. I’ll just talk about marketing on this podcast.

But go find podcasts and YouTube videos. There’s a lady named Kathy Kennebrook out of Florida. She does a lot of deals. She’s been in the business for long, long time and she’s got a course called Direct Mail Marketing Magic, I think is what it is. And she’s been a student of marketing for years. I mean, she’s been doing deals since the 80s, I think, and still plugging away and she’s got a great course and some people may look at that and say, Oh, it’s outdated. It’s like, it’s not even online yet. It’s just a folder. It’s like with a bunch of photocopies of old type different marketing. Guess what guys? That stuff works. It still works. It always will work.

So don’t, like, discount or discredit people who’ve got older courses that haven’t been updated. And hers, I shouldn’t say it hasn’t… Hers has been updated. She does update it. Okay. She’s just not strong with technology. And holy smokes, there’s a big tree that fell down. She’s maybe not as strong on the, you know, the internet marketing side of things. But the marketing she does do works. It’s just consistency over time.

You know it reminds me of, as I’m reading right now, the book by Dave Ramsey called EntreLeadership. Really, really good book. You should go pick it up. And he’s got a thing in there when he’s talking about… he has a chapter on marketing and there’s a formula for momentum, unstoppable momentum. It’s called the momentum theorem, okay? It’s the momentum theorem and it’s focused intensity over time, multiplied by God, the God factor, equals unstoppable.

Momentum focused intensity over time, multiplied by the God factor, equals momentum. And that’s the momentum theory. And so here’s what… I’m trying to bring this all together. If you focus with intensity on your marketing over time, which means you’re doing it consistently and you’re, it’s a hyper-focus… if you multiply by the God factor, which means, you know, if… I believe that God wants to bless your business, He wants to make it grow. He wants you to prosper so you can be a blessing to other people. So God’s an important factor in all of this, right? I definitely want His blessing. I don’t want Him not to bless or ignore.

So anyway, that equals momentum and you’ve got to figure that out for yourself and you’ve gotta be intensely focused on what’s most important. And I just want to challenge you again to remind you that marketing is the most important part of this business. So, once you learn marketing and become a student of it and study it even in other industries and other spaces like internet marketing or direct mail, direct response marketing… There are books, there’s Dan Kennedy’s written a bunch of good stuff on it. Um, you know, maybe even Grant Cardone talks a little bit about marketing. He talks more about sales, I guess. But the other thing is to see what these guys are doing. Sometimes the best marketers in the world are not out there teaching it. They’re actually just doing it.

Alright, so I gotta go. It’s just a beautiful day. Love Mondays. Go out there guys. Get it, make it happen and get my new book. Just came out with a new book I’m excited about, REI Secrets. They’re daily nuggets of real estate investing wisdom to help you get more leads, do more deals. And it’s, every chapter is a couple of pages long, maybe three pages long, just teaching some really cool stuff, inspirational stuff on real estate investing. And you get the book for free. Just pay shipping and handling at REISecrets.com REISecrets.com. All right guys, we’ll see you take care.