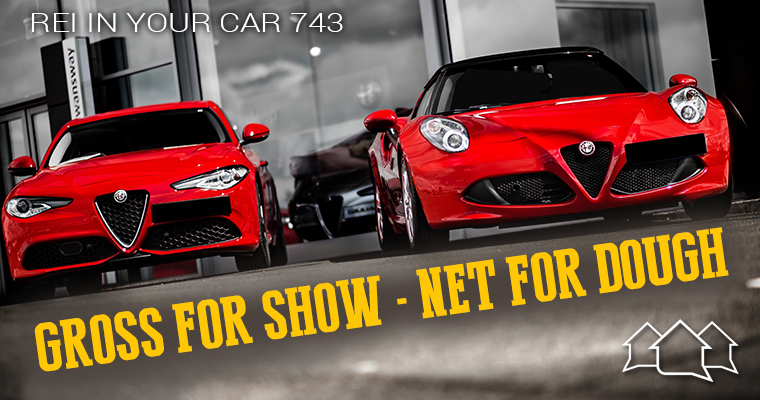 I’m going to talk with you about real numbers. I just left the bank with a $12,500 cashier’s check. I couldn’t deposit it in another bank today because it had closed.

Doesn’t $12,500 sound great? Yes, it does. But it’s a meaningless number to me and my family as far as this particular land deal goes.

My net on this deal, which I did in partnership with others, was $5,400. There were expenses and operating overhead involved. And I will pay taxes on the $5,400 I earned, making the net even lower.

So when you see people flashing checks on Facebook and Instagram, take it with a big grain of salt. They’re showing checks for the sale of a property… maybe. But the amount they take home is much less.

People who share this type of information are hurting the real estate investment business. The numbers they’re talking about are lies, and they’re misrepresenting the possibilities for people just starting out.

If they’re showing a photo of a fancy car, the car is probably leased. Some people show fancy homes they’ve rented for a day on Airbnb. Really… it’s not where they live. It’s a crazy ego stroke.

Be an adult; be skeptical of others and honest with and about yourself. A closing check is just that. You use it to pay staff, lenders, taxes and other expenses like marketing.

Don’t fall for the shiny objects that some people feel compelled to brag about. Stick to the basics and you’ll make a good living. You’ll work for yourself and feel good about yourself.

Hey Joe McCall REI In Your Car on this podcast, I’m going to talk about the real numbers. Are you Ready?

So I just left the bank. I have a $12,500 cashier’s check in my possession right now and I’m driving actually to the gas station to get some gas because the bank’s already closed. I withdrew the money on a cashier’s check from one bank to transfer and deposit into another bank, but the bank, second bank is closed. But I was on Facebook and I thought I’d do something funny. Maybe I offended some people, I don’t know. I posted a video of me holding this check saying, hey, I made $12,500 look here’s the proof. And then I went on to explain that not exactly, right. And this is something that I want you all to think about when you, if you’re on Instagram and Facebook, you see these guys flashing lots of checks and it’s cool, maybe it’s inspirational most of the time it’s bs.

Well, I put about $6,700 into the deal to pay off some taxes, to pay off a couple of liens and to pay the seller a little bit of money. This is a vacant land flip. So here I have a check for $12,500 but the real numbers go behind the scenes. Pull back the curtain. Guess what, there’s expenses. There’s operating overhead in these deals.

I saw somebody recently posting a check for over a million dollars and after getting a bunch of heat, he said, okay, okay, this is just the proceeds from the sale of this deal. Obviously it’s not my profit. You all should have known that and he was defensive, right. But this is a thing like so many people are doing this. Realtors do it all the time, right? They say, hey, we do $450 million a year in real estate. What they mean is they’re selling $150 million worth of real estate their commissions are squat compared to that, right? They may have to split the commissions with the buyer’s broker and then the actual agent has split their commissions, another 50% with their broker. So there may be walking away with 25% of 6% of $150 million. Does that make sense? A lot of these, quote unquote top producing agents that I know of, I guess what, they’ve got huge staff.

They got 10, 12, 20 people working for them. They have a lot of expenses. They put a lot of money into marketing and resources that you never hear about, but they know about it, right. The average top producing agent that I’ve known that I’ve met, they take home maybe a $100,000 thousand dollars a year. It’s like not much and they’re all working like 60 hours a week. You take the profit that somebody tells you they’re making on a deal, just cut it in half. If they tell you, I only spent two hours on this deal, well times that times 10, like I don’t know what it is. Like we feel like we have to brag and exaggerate the truth a little bit. Talk about how we were making all this profit. But guys, you know, it’s not that simple. Most people out there that are doing a lot of deals, they’re spending anywhere from $2,000 to $3,000, maybe $4,000 in marketing per deal.

They don’t know their numbers. Or if they do know their numbers, they’re not telling us about them. They have acquisition managers, disposition managers, they have assistance, they have offices, they have overhead. The guy is, I’m telling you I know this from experience. Somebody that’s doing really, really well. They’re netting maybe 35% netting and we’re not even talking about, well maybe we are talking about taxes, but like there’s a big chunk of those checks that you see flashing on Facebook that are not being taken into account. They’re trying to brag about the big deals, the big revenue, gross revenue, not the net profit. Huge difference. I was also thinking about this. I’ve heard some people talk about how they, I don’t know, I’m still shaking my head at this, you know, they do 200 deals a year. Well, what they’re talking about, they really only did a hundred deals a year.

They’re counting the buy and the sale as separate transactions. So they did 200 transactions in a year where they’re really only did a 100 flips, 100 wholesale deals. Can you believe that people actually twisting the numbers like that? Well, I don’t know what to say. It’s just, it’s got to stop. I think it needs to stop when people are out there flashing these checks, ask them the numbers. Hey, listen, data not drama is one of my friends Mark Evans, I think invented data, not drama. Show me the numbers. Like, okay, this $30,000. Great, congratulations. How much money did you spend to get that deal? How much of that is going to go to commissions to your partners that you got to split this with to the virtual assistance that you’re giving a bonus to the phone guys that get a bonus.

The guys just sold the deal they got a bonus. The money you have to pay back to the hard money lender, the transactional funding costs, the interest you paid on that money that, you know was being used for those two or three months. Well, sometimes it’s just a facade and if anything, it’s hurting the industry. And it really annoys me. Some of these guys that are having the real nice cars, congratulations, good for them. I’m not against driving really nice cars, but you know what guys, they didn’t pay cash for these cars they’re leasing them. They’re paying maybe $1,500 bucks a month leasing these cars.

It’s even more, it’s even worse of a problem in some different internet marketing circles where people are shooting these videos with really exotic luxury cars and beautiful mansions and stuff like that and you dig into it. They’re just renting the house for a day on Airbnb and they’re renting the car from the dealership for the day just to get the videos and stuff. You know, I’m not trying to start a war, but I’m just trying to bring to light some of the truth out there.

If you want to brag about how big of a deal that you are, show us the real numbers after expenses after your overhead, after your profit splits, after taxes. What are the real numbers on this, right? So on this deal, the checks for $12,500, I actually netted $5,400. So the rest of that, what does that, I’m bad with math when I’m on the spot. $6,000 grand, $7,000 grand goes to reimbursing my acquisition costs for buying the deal. But guess what? I still have to pay taxes on this stuff to pay taxes on the $5,400. So my net profit might be $3,500, I don’t know.

Something to chew on I guess, huh? I hope you guys are doing well. Listen, if you want to learn how to do lease options, you got to check out my new webinar. Go to SLOClass.com SLOClass.com. Check it out and I think you’re going to learn something new about how to do lease option deals. This land flip that we flipped here, we just used a, well actually nevermind. I was going to say we used an option on that land flip. We didn’t, we used to purchase and sale agreement, so nevermind, but lease option deals, love them, use them all the time. If you want to go check out the class that we just did, go to SLOClass.com. I also demo in that webinar how we use REI Simple. How we’re using REI Simple right now to do deals. And I show you a demo and from beginning to end, check that out. All right guys, that’s all I got. I got to get some gas here in my car and then go home. We’ll see. You guys take care.