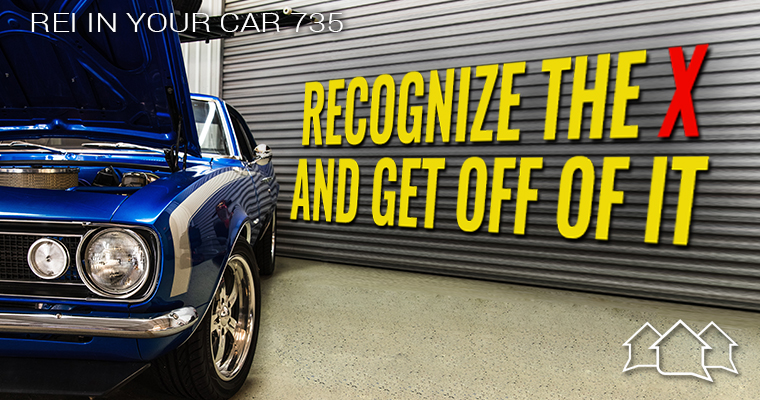 I’m walking around outside, so you may be able to hear frogs in the background. I’m talking to you about something I learned today at a prayer breakfast.

Hearing Chad speak made me realize how real and how serious PTSD is. A lot of veterans have it and they need help. The VA Health Administration is overwhelmed right now and citizen support is required.

Attendees are encouraged to relax in these beautiful surroundings and begin discovering the purpose for the rest of their lives. Programs for men and women are held separately.

The foundation also stages Resiliency Programs on military bases around the country as they believe preparation for deployment and early-to-immediate post-combat intervention is crucial.

Chad shared one of the main tenets of Marine Special Ops training which is, if you find yourself on the X, get off of it. First, recognize you’re in trouble (on the X) and get out of the situation (off the X) any way you can as quickly as you can.

This applies to life, too. You could be on the X in your business, in your marriage, just in general. Be honest and acknowledge you’re on the X and do something about it.

That doesn’tmean close your business or leave your marriage. It means to observe where and what the X is and go after it. Talk to your spouse or your business partner and work on the X together.

I’ll post links to some of Chad’s videos because he can explain it much better than I can.

I don’t know if you can hear those frogs. Yeah, I’m just walking around outside right now because I wanted to record this podcast earlier and I didn’t get a chance to and I’m afraid I’m going to forget. But this morning I had just an incredibly impact time. The local CBMC I think it stands for Christian Businessmen’s Ministry, something something. They have their annual prayer breakfast here in Saint Louis every year and I don’t know 500, 600 hundred, 700 people were there. Mostly guys, some ladies there too, but it was just really, really good. There’s always a really good guest speaker. An

d so I went this morning and there was a guy that was speaking there. His name was, I don’t want to mess his name up, Chad Robichaux. I will give you a link in the show description. His name is Chad Robichaux, R. O. B. I. C. H. A. U X. And this guy is amazing. Former military special ops recon and he’s just got an incredible story. It’s 8 or 7 or 8 tours and tours in Afghanistan. And he was telling a story about what happened to him and he had severe PTSD.

And one of the things I realized after listening to him talk was that, I know PTSD is real. It’s there, but like you really figured out, you’re listening to his story that it is like real, you know, it’s a serious problem and a lot of our vets suffer from it and we need to really take care of them and do whatever we can to help them, it’s a serious problem. But anyway, he was talking and telling a story and one of the stories he told was one of the things they train you in special ops is whenever you get on the X, it’s called the X.

When you’re in a really tight spot, you have to make your decision. Well, the first thing you have to do and the first thing they teach you in training is you have to recognize your on the X. And the second thing you need to do is get off the X. And I thought that was really good and profound. Let me tell you a little bit more about it. So he’s on a mission one time and he sees these Taliban guys following him and his guy, he was with, I think it was a navy seal that he was with, we’re in a vehicle and they could tell they were being followed. And so then they started racing through the streets of Cabo. And it was just like a scene from the movies. They’re racing through these really incredibly busy streets on the sidewalks, crashing and squeezing in between cars to get out.

And they’re at a point where they get to a roadblock and they have to stop. And the bad guys, the Taliban guys, there’s a truck load full of them. They, he made a joke, he said, how many Taliban can fit in the truck? And the joke is, the answer is one more. Because there’s always just tons and tons of Taliban that could fit in these vehicles anyway. And they all have, you know, the machine guns and hand grenade launchers and things like that it’s just ridiculous. So they, he’s parked and he, they start getting out of there truck and start surrounding his vehicle. And he realized at that point that he was on the X he recognized it right away and he knew that the only thing that he could do is be to, he hit the guests really hard, crashed into somebody else and crashed into another car and then got out barely surviving all right.

Anyway, so that’s an amazing story. And I didn’t do it justice at all, but his whole point and the story was every time in business and in life, we all have our X’s. We all have that X, that point in our life where we need to recognize where on the X number one and number two, we need to get off the X. Whatever you can do to get off the X, you got to get off the X. He’s got an amazing story it so inspirational. I was in tears just listening to him. And then, you know, he had PTSD and he was a professional MMA fighter when he got back to and won a bunch of fights and there’s videos and he was on Showtime and payper view and all of that.

And they’re making a movie right now about him, so it’s coming out soon. In the show notes, I’m going to put a link of some of his videos there, you really, you guys should really check it out. And if you know anybody that’s in the military and suffers even from slight PTSD, he has a ministry at an organization that helps vets and it’s completely free for veterans. It’s really amazing what it does. But anyway, I wanted to, I’m not doing this story justice at all. I don’t know if it makes any sense to you what I’m trying to say.

But some of you guys, you got to take a look at your business and take a look at your life and you got to recognize when you’re on that X. And what are some examples? What would the X be in real estate investing business? Well, you know, you’re hemorrhaging cash or you’re spending more money on education than you’re actually making on deals and it’s affecting your marriage and your relationship with your wife or your spouse and your kids and you’re spending too much time on the computer studying and not enough time focusing on your kids and you’re just spinning your wheels and spinning a ton of plates and you’re just not getting anywhere.

Is that some of you guys? Well maybe you’re on that X. And you need to do whatever you can to get off the x as soon as possible. Hold on, it reminds me of another story I heard from another marine. Some of you guys know him, Sean Terry, and he tells the story whenever you’re facing an obstacle you can make several decisions, right? You can choose to stop and just quit. You can choose to go around the obstacle. You can choose to go to the left or the right or up and over it or dig up something underneath it. Or you can choose the blast right through it. And the best course is always, usually always just a blast right through it. And if you want the fastest path to success you just need to destroy your obstacles.

And it’s kind of the same thing. And you know, sometimes listen to these stories of people that served in the military and I so respect them and I sometimes wish that I had that kind of experience. But then after hearing Chad’s story, I’m like, Oh, maybe I’m glad I didn’t. But think about that. What in your life right now? Where are you? Are you on that X? You need to hurry up and get off that X as soon as possible. Does that make sense? Get off the X.

I’m going to post the link to his video, one of his videos and maybe I can get a recording of his presentation at the men’s prayer breakfast this morning and I’m going to try to send it to you guys or put it in the show notes at RealEstateInvestingMastery.com. I want to challenge you to start thinking about these things and what does it matter if you have a successful business, right? And your personal home life is falling apart and they have no relationship with your kids and no relationship with your spouse. What does it matter if you’re spending tens of thousands of dollars on your education? You know everything that you’re supposed to be doing but you’re not doing anything with it.

Need to get off the X. You either need to stop buying education or you need to stop studying real estate and just focus on your job, focus on whatever, wherever you’re working and stop it, quit give up like you need either need to go all in and start taking action or not. Stop, do something else. Maybe it’s not the thing for you. Maybe it’s not your gifting or your calling to be small business owner or entrepreneur or something like that. I know maybe you want, but if you keep on spending all this money in education and coaching and you’re not doing anything with it, that money could be better spent doing something else.

I don’t know what that is. You probably know. You’ll probably be able to figure it out. So get off the X. Recognize it get off of it. Simple profound advice. God bless all of our veterans. All right guys. Again, if you want the video links to this guy and his organization, I’m going to put it in the show notes. I think one of his ministries, his charitable organizations, I don’t know what he calls it, like he helps people with PTSD. I think it’s called Mighty Oaks or something like that. But if you look up his name you’ll see it in Google, I’ll put it in the show notes. We’ll see you guys.