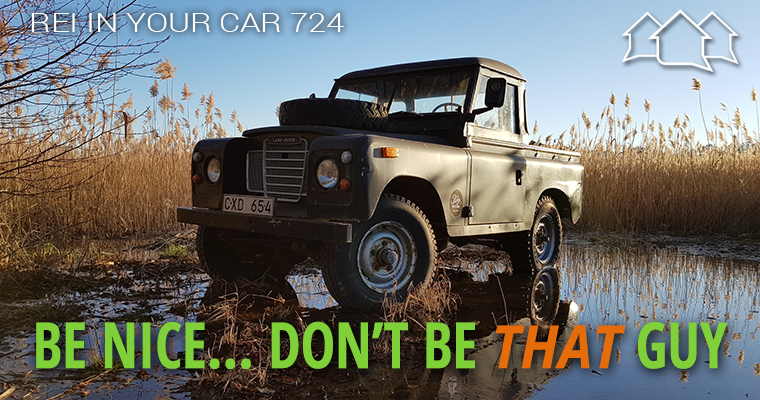 I’m going to be talking about patience so bear with me.

I’m driving to get my wife’s car serviced early on this morning. It’s probably the 6thtime I’ve taken this car in for the same problem. So I could be a grumpy guy today, but what’s the point?

And I’m behind a woman who’s driving 20 miles an hour under the speed limit. I’m being patient with her because I can see she’s an older person. Just working on not being the person who blows his top.

Our job is to solve problems for these people. Maybe you won’t get to buy that house. Maybe you don’t really need that house. Just do the best thing for the individual you’re dealing with every time.

Hey good morning guys welcome to REI In Your Car, this is Joe McCall and on this episode, I’m going to be talking about patience, patience. Let’s go.

So I’m driving right now to a car appointment for my wife’s Buick. She has a Buick Enclave and the service airbag light is going on. So I’m driving down it’s early and Thursday morning driving down to the dealership. But here’s the thing I have several reasons to be really grouchy and grumpy this morning and I’ve chosen to be nice and be patient and kind because why not right I have better things to worry about and I thought I would share it with you because this relates to business and it relates to our personal lives as well. But like. This is probably the fifth or sixth time that I’ve taken this car to this Buick dealership to fix this problem with the airbag light, it’s a sensor that’s not working right.

And do you think if I go there and if I yell at them and get real mad they’re going to be that willing to help me? No, probably not. But I’m going to be very firm with them like, hey you know what’s going on? And I’m going to be nice about it right. I found early on that and I think maybe somebody in my family, I won’t say who, sometimes when they were mad at customer service or they wanted to complain about something they would make a scene out of it, and it was always super embarrassing as a kid. You know that you know that person? I think maybe we all have someone like that in our family. Like oh my gosh please no and you’re embarrassed because they’re like making a scene and they’re justified they’re right in complaining but it’s like the way they’re doing it bad. So I don’t want to do that. I don’t want to be like that, right.

But I also want to be the guy who doesn’t complain about anything and like just, lets them know that there’s not a problem or doesn’t let them know that there is a problem. We were at a restaurant a few months ago and the cockroach literally fell from the ceiling or somewhere, onto my wife’s shoulder and she freaked out and then I freaked out because she flipped it over to me and then it was on me. So yeah when a cockroach falls on your shoulder you should tell the restaurant manager about that. My wife didn’t even want me to tell them. She says Joe people in third world countries they have cockroaches in their restaurants all the time. Okay but we’re not in a third world country. But I told the manager we left and I didn’t make a scene. But yeah that’s something you got to tell the guy about.

So I’m now driving behind this lady who’s probably in her hundreds, 120 maybe 150 years old. and she’s driving literally like 25 miles an hour in a 45 mile an hour speed zone. And you can tell she’s old by looking at the back of her head right now and she’s got a handicapped sign on her mirror. And you can tell she’s old from her hairdo like, I can tell from her hair and she’s driving an old Ford Taurus, actually it’s not old it’s a newer one. But you know what I’m just going to be patient with her. I’m not going to write her bumper I’m just going to give her space and she’s just relax guys, you know. I remember once I did a podcast on wag less no bark less wag more. I saw somebody with a bumper sticker that said bark less wag more and I thought what a concept.

Like what if we all especially in this hot political heated environment, where it just seems like you know I’m not defending Trump but, you know the guy I just wish sometimes he would shut up. Like lately he was complaining and blasting, oh she’s turning right, hallelujah. She just turned right. I can go the speed limit now. Oh shoot I won’t bring up politics but you like he won’t shut up. Like I voted for him but I just wish he would shut up sometimes. The last few days he’s been complaining about McCain and blasting McCain and the guy’s dead leave him alone.

Anyway so be patient guys, bark less and wag more and hear I am barking about politics and I won’t do that I promise. So let’s see how does this relate to real estate? Well let me tell you something when you’re sitting and dealing with a seller who is elderly who’s in their 60s 70s or 80s and they’ve got this house that they’ve lived in for 40 to 50 years and they’re leaving it they don’t want to leave it, you need to be patient with them, you need to show them some kindness. And you know what it’s ok if they don’t sign that contract right then and there.

Don’t play those stupid manipulation games with people in those kinds of situations. You know what I mean? Like you got to sign this now before I leave. Maybe it’s ok to do that with younger folks, but when you’re dealing with a motivated elderly seller give them time give them patience. You know even if they’re not elderly but they’re in a situation where they’re going through a hard time divorce maybe, job loss they’re facing foreclosure whatever the situation is, man you’re number one job is to solve their problem, that’s it. Your number one job is not to make money from that seller or from the buyer or even your number one job is to help them and solve their problems, okay. I would rather help them and solve their problems than make money.

And sometimes the best thing you can do to help them is to give them a real to reference refer them to a realtor who can list a house on the MLS and where they can list it and make more money. And you know it can sell fast on the MLS and doesn’t need that much work. So just be thinking about that. You know what it’ll come back to you, it’ll come back. You reap what you sow and if you’re out there reaping in impatience and in anger and you only think about yourself, it’s not going to end up well for you. You’re going to die a grumpy old man and you’re going to wonder why nobody’s at your hospital room and you’re going to wonder why nobody, why isn’t anybody here. Why don’t I have any flowers? Why doesn’t anybody love me? Just be cool.

Hey I’m driving by the Starbucks where I saw that bumper sticker. You know I remember that bumper sticker so well because it was when I first started doing this RIE In Your Car podcast and I was worried about finding things to talk about. And there was a bumper sticker, wag more bark less. And I thought that’s something I can talk about. So anyway guys take care. Listen I’m going to go, go get my book WLOBook.com. Learn about how to Wholesale Lease Options if you don’t have that book. You should go get it and teaches you how I quit my job eight years ago, no 10, 10 years ago next month. Yeah it’s crazy but an awesome wild ride. Doing lease options just flipping lease options are the easiest deals to do in the world.

I was reading some Facebook stuff last night in one of my Facebook groups and it’s so cool to see some people in there who were talking about the deals that they’re doing and how they quit their job. One guy sent me an email Facebook message friend of mine who has gone through my courses and stuff like that but he just did a deal, sandwich lease option. He’s getting $700.00 dollars a month cash flow. He’s got $500,000 thousand dollars back into equity and he just got a tenant buyer in there who put down $20,000.

So he got this deal with hardly with no money down, no money out of his pocket. $700 dollars a month in cash flow from one deal. He does this all the time. So anyway if you want to learn more about lease options and to do deals like my buddy Matt it’s not just me. I mean I can talk about deals we’re doing but they’ll be boring. Some I know some of y’all don’t believe it, i’s fine I’ll just tell you about students real people that are doing it that aren’t gurus. Maybe you’ll believe them.

All right. So go get the book WLOBook.com And again just to summarize and like an action plan that you can take home. Just be patient, take a step back and smile a little bit. Make a joke out of it, laugh and don’t be such a jerk wad, okay.

Be nice and be patient when you’re working with sellers you know give them time to think about it. Make an offer and don’t be a jerk and if something is better for them that you can’t provide then tell them about it. Refer them to somebody else and do whatever you can to help them, that’s your number one job. Not to make money it’s to help others and serve other people. All right we’ll see you guys. Bye bye