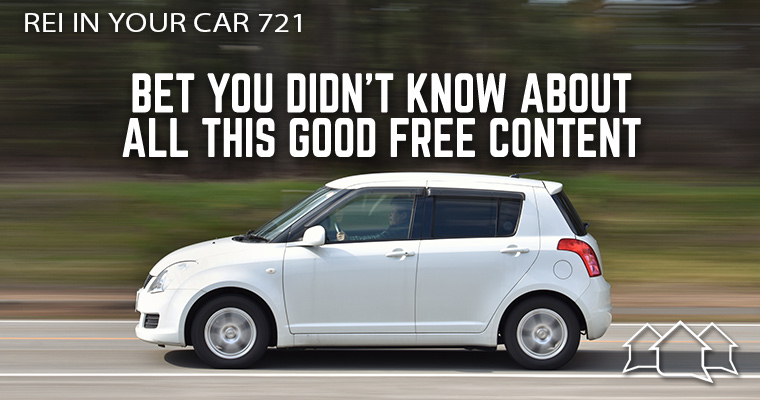 Welcome to the podcast. Glad you’re here. I’m recording in Phoenix where I’m about to speak to the PHX REIA.

I just ate at Rehab Hamburgers… they’re huge!  And now I’m giving you some rehab by letting you know you don’t have to spend a fortune on training to succeed in real estate investing.

I have LOTS of free training material available to you. All you have to do is go to my website and look for past podcasts, a book on wholesaling lease options (WLO), a Mindmap on finding cash buyers and a WLO contract.

And that’s not all. There are more online and the free content changes from time to time. Often podcast guests make their materials available to my listeners as a tie-in, and I blog and teach on Facebook and YouTube almost daily.

I also send emails a few times a week that give inspirational nuggets to investors. I am compiling those into a book soon.

I’m not bashing training. You need to learn and you can benefit from coaching, but don’t get overwhelmed with the amount of training that’s out there and how much it costs.

Use free materials as much as you can. And not just mine… other free content is out there if you look.

Hey, what’s up guys? Joe McCall, REI In Your Car, but I’m walking.

I’m in Phoenix, Arizona right now getting ready to go speak at the Phoenix REIA. It’s not the Big As REIA that everybody knows, but it’s called PHX REIA PHX REIA, whatever it’s called, right. Anyways, so I’m just walking from the coffee shop to my car and my goodness, it’s hot out here it’s like mid eighties, I’m used to all of this cold, frigid weather so I’m wearing my sweater and I’m burning up. Anyway, super awesome and excited to be in Phoenix. I’ve come here at least once or twice a year to speak somewhere or go to a mastermind and I’m at old town Scottsdale right now, if any of you all know where that’s at, it’s a cool little place. I just had lunch at the Rehab Hamburger, Rehab Hamburgers, I think it’s called. It was a monster hamburger I didn’t know what I was getting myself into. Then I walked across the street to Joe Joe’s coffee, if any of you all know where that’s at. Anyway, I just wanted to tell you guys something. I wrote a Facebook post today. No, it’s called Rehab Burger Therapy.

Wrote a Facebook post today that I thought I’d share with you guys and I started it with kind of a statement from somebody who’s just wanting to get started in real estate and it says, yeah, I want to learn how to do deals but first I want to max out my credit cards with really expensive programs and coaching. Then I want to pay $35,000 for a coaching program and get upsold into other things. And then I want to go to a boot camp where I’m supposed to learn how to do deals and I just want to be pitched coaching the whole time. And then I want to be given a task list of 100 million things to do and feel overwhelmed. And then I want to be able to get a ton of questions that I can’t find the answers to and struggle to figure it all out on my own and then I was going on and on and on, just trying to be, I don’t know what kind of humor you call that sarcastic humor maybe.

But anyway, then I started telling everybody, Hey, a lot of you all don’t know how much free content that I’ve been giving out over the years. I’ve been doing this podcast since 2011, man it’s hot out here sitting in the sun, so I’ve been doing this free podcast since 2011 and I’ve had boy almost three and a half a million downloads, which is pretty good. There’s some guys out there that have a million more, but maybe 20 million more, but it’s pretty good since 2011 over 700 episodes. I’ve been doing them on average about three times a week and just dropping tons of gold. Pretty soon, I’m not sure when this will be coming out, but I just did a podcast on the definitive guide to finding cash buyers, more cash buyers, and you could shake a stick at and it’s all there, you know, that kind of stuff. People could sell a course on that for $100 bucks, $1,000 bucks for free.

I just want to deliver value and I do this for several reasons. Well let me say this also first. I have a YouTube channel, lots of videos on YouTube. If you don’t know where that is, just go to YouTube and do a search for Joe McCall. I did a whole course on wholesaling, Wholesaling 101. Go to YouTube to search for Joe McCall, Wholesaling 101. You’ll see my channel there, go ahead and subscribe to it. I’m going to be putting more content out there in the days ahead, so stay tuned for that. Then I also have a Facebook group if you all didn’t know about that, if you’re into the Facebook’s and the books or face page. I’m in Facebook and I have a group in there called Wholesaling Lease Options Group. I might be changing the name soon too Simple Lease Options, but there’s a group called Wholesaling Lease Options, over 10,000 members in there.

A lot of good place, a good place to go to ask really good questions. Then they also have my Facebook page, it’s just called Joe McCall Wholesaling Lease Options and I think I’ll be changing that soon to just Joe McCall or something. But that’s my Facebook page and on there I do almost daily Facebook live videos and just usually teaching something and it’s a lot of fun. I enjoy doing that. And then also I think this is my last thing. I every three, three times a week I send out an email to my whole email list of a good content email. I get a lot of compliments on these emails. It’s kind of like a newsletter, but it’s just short it’s like a page long. I’m going to be combining all these emails. I’ve done about a hundred of them so far and I’ve got about a couple of hundred more in the books, believe it or not.

Yes, it’s crazy, I’m putting them together in a book, I think pretty soon you’ll be hearing more about that. It’s going to be called REI Secrets and they’re like bite sized inspirational real estate investing education chunks that you get a lot of good stuff out of it. So you know there’s, I know there’s a lot of voices out there, it’s a noisy world right now and there’s, I’m not bashing education like paying for education, but I want you all to know that there are a lot of alternatives out there to big expensive high end programs. I do have my own courses and I do have my own coaching out there, but a lot of you guys, I know you can’t afford that. Well, you know, thank goodness for where we are and what we have today with the internet, right?

There are literally any subject you can think of there’s podcasts, there’s YouTube, there’s blog posts, there’s Facebook’s, Instagrams. It’s almost overwhelming, which you could make a case why we need coaching? Is because it’s so noisy out there in the, in the world today. So, if you guys didn’t know about all of that stuff, check it out, okay. You have this podcast if you’re listening to this, you’d know about it. Awesome, good for you. Have the YouTube channel, Facebook group, Wholesaling Lease Options, Facebook group and then I also have the my Facebook page where I put Facebook live videos on there. And I don’t know if I I’m close to my 5,000 friend limit on my Facebook profile, but I think you can follow me there. That’s pretty much, I’m not really big into Twitter or Instagram or Snapchat or Linkedin. So when I’m posting stuff, it’s usually into the Facebook’s. You know I’ll be doing more YouTube coming up.

But check that stuff out if you’re not aware of it. And go to my websites, one of them, JoeMcCall.com maybe the podcast RealEstateInvestingMastery.com and somewhere in there if you sign up for one of my free things, you get added to my email list and I’ll start sending you these emails three times a week teaching good value bombs and stuff. Cool. Again, the reason why I want to teach this stuff is because I want to give back. I wish I would have had this stuff when I was getting started. I know what it’s like to be fleeced as it were with unscrupulous gurus, people that sell coaching and don’t really deliver on anything. Just kind of throw a bunch of books at you and expect you to just figure it out. So that frustrates me. And then maybe that’s the reason why I do so much of this free stuff, but I know it’s helpful for you guys.

And so if you like it, come on, leave a review on ITunes and Stitcher, wherever you listen to this podcast, leave me a review and subscribe to the YouTube channel. Give me some likes. When you see a Facebook video that means something to you and you get a lot of value out of. Cool. All right guys I appreciate y’all. Oh, my book. I got a book that’s free too, did I mention that before. If you want my book, it’s free. It’s called Wholesaling Lease Options. You can go to WLOBook.com WLOBook.com. You’ve got to pay shipping and handling, but it’s like six or seven bucks and you’ll enjoy it. All right guys, take care. Comb your hair. I have to say that. If you all don’t know, that’s a well never mind. I appreciate you guys. Take care. See Ya. Bye. Bye.