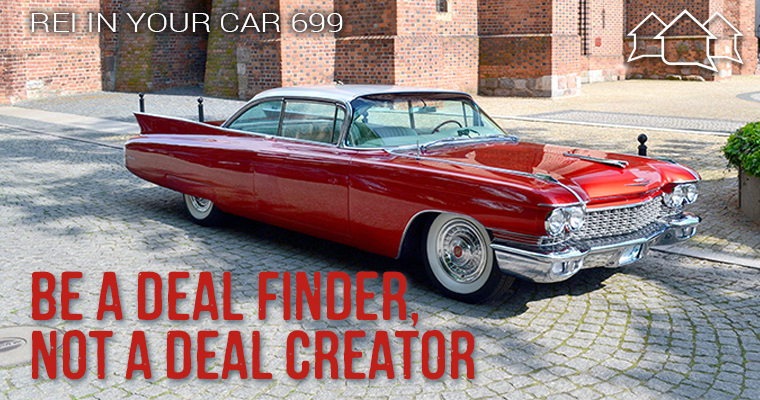 I’m talking today about a post by Tom Krol that I saw on Facebook. It’s good advice about avoiding small deals.

Set deal size limits and stick to them. Don’t simply take on a deal because it’s there.

You are a real estate expert. Earn the income of an expert.

Be willing to walk away from deals. You’ll find it’s a powerful negotiating stance.

Welcome, this is the Real Estate Investing Mastery podcast.

All right. Hey guys, welcome. This is the Real Estate Investing Mastery podcast and I’m kind of talking quiet here because I am in the sun room right now. It’s early in the morning and don’t want to wake anybody up. But um, the, my friend, good friend Tom Krol from Wholesaling Inc just posted this Facebook post about 20 minutes ago and I thought, man, this is some of the best advice I’ve heard in a long, long time. And it’s about avoiding tiny deals and not being happy with smaller profit deals.

I remember when I hired my second acquisitions manager, this was in 2012, 2013 and we worked together for 10 or 12 months, 8 or 10 months maybe. And um, we, I’ve interviewed him before. His name is Rick and a super cool guy and we, he came from making about eight bucks an hour at Home Depot part time.

He was a part time minister and pastor and then working at Home Depot to pay some of the bills because he wasn’t making enough money in the ministry. And a real simple guy and very simple lifestyle, he didn’t need a ton of money. And we started wholesaling deals and he was happy to make a couple thousand dollars on each deal. I mean, he was like, Joe, I have to work two months to make this kind of money. This is amazing. Why would you want any more than this? He also felt a little bad at times. Felt like he was taking advantage of sellers. And um, but I knew he was really good. I kept on pushing him. I said, no, we need to try to get more. And I said I want to shoot to try to get a minimum of $10,000 profit. And uh, it took him a while to learn that.

And I kept on pushing him for it and eventually we started making. He started asking or expecting for $4,000 profits and then $6,000 profits. And then finally got him to where he was willing to do 10 trying to shoot for $10,000. And he was just, that was part of his offers, what he was expecting. And we started, our profit started rising from an average of two to three grand up to seven or eight grand. One of them we made I think 12 or something like that. And then we split ways as friends because of something that happened with one of our buyers. It’s a long story. I won’t get into it, but he’s still wholesaling today. He averages about 100 deals a year… 90 to 100 deals a year and is doing really good.

Well, it really got me thinking a lot at that time. I remember, sometimes, a lot of wholesalers when they’re first getting out starting, um, you know, they’re, they’re happy just to make a couple three grand, but then you get comfortable or you just, your expectations start lowering and you think, well that’s what everybody’s making. Or when you go into a new market or go to the real estate clubs and people tell you things like, yeah, you can’t wholesale and get more than three to five grand on a deal. It’s impossible.

Well, that’s the wrong attitude to have. And I want to read you this post from Tom Krol because I thought this was so good. He got a testimonial from one of his students. He sent him a picture of a check. It was for $19,526 and the students says this:

“‘I finally understand what that, at one time you would post that if you’re not making it, if you’re not making $10,000 in a deal, do not get involved with it. I’ve been speaking with Todd and he’s been telling me if I’m not making it at least 15 grand to not get involved in the deal. He’s been getting on my butt and now I get it. When I first saw your post about that, I remember thinking it doesn’t make sense. I would look at it as leaving money on the table and now I get it. It’s not about the money. It’s about raising your standards and setting the belief systems higher, which will ultimately give in your life.’ Love it. Anyways, thought I’d share that with you. Have a good night, Tom.”

Okay, so that was a student, I don’t know who it was, I just grayed out the name, but anyway. So, read this from Tom… listen:

“Wholesalers, avoid tiny deals (all caps)! A student and a friend of mine, reminded me of an important strategy last night. Wholesalers, you must have deal size limits that you’re willing to walk away from. Number one, the smallest deals are the most difficult and complicated to close. Number two, small deals take very long to close. Number three, when the seller knows you are not negotiating and willing to walk away, the deal size magically goes up. Number four, when you spend time on the small deals, you are a deal creator, not a deal finder…”

Which is really important. I think it’s important to understand that guys… we need to be deal finders, not deal creators. Um, you gotta be real careful that… I’m talking now, I’m not reading this. You need to be real careful with becoming the motivated buyers, right? Trying to make, trying to turn a non-deal into a deal just so you can make a few thousand dollars. You’re just asking yourself, you’re asking for trouble when you do that.

So, “Deal finders… wealthy… they have a business that runs without them and they enjoy life. Deal creators, they’re frustrated… roller coaster income. They have a job they cannot delegate. They’re always working. We need to become real estate experts.

Isn’t that good advice? I love that and you will see when you start shooting higher, you will start finding those deals and if you’re willing to walk away, there’s real power in your negotiating. If you’re willing to walk away from a deal, if you can’t get the number that you have to have. Sure, someone else may come in and offer the seller more, but in the long run you’re going to win more deals, you’re gonna, make more money if you have that kind of negotiating stance.

So be a deal finder, not a deal creator. Cool. Good advice. Thank you. Tom. Tom Krol from Wholesaling Inc has got a good podcast. You should just go look it up at Wholesaling Inc, Inc. and that’s it for now. Guys we’ll see… Oh hey, by the way, if you want, I have a free mind map and a course on wholesaling 101. If you want to go check it out, go to flipmindmap.com. Flipmindmap.com or text the word flip to 313131. Text the word flip, F L I P to 313131. About a year ago, my coaching business partner and I did a series of videos explaining wholesaling 101 from the beginning in very simple steps and we gave you all of our marketing pieces and contracts and checklists and scripts and it’s all really good stuff. Go to flipmindmap.com or text the word flip to 313131. Guys, have a good day? We’ll see you, bye.