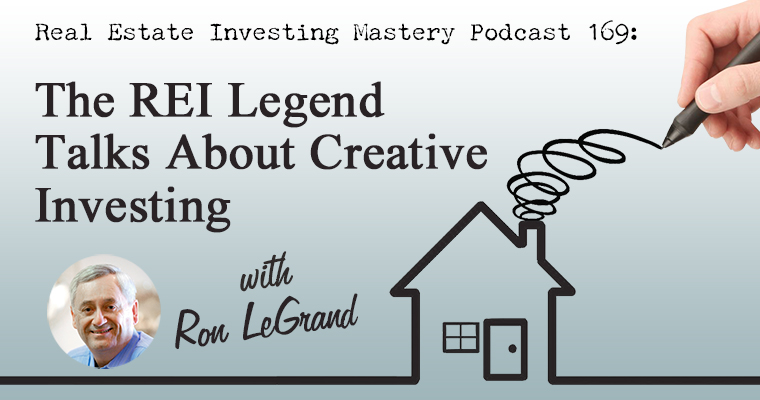 I’ve been looking forward to creating this episode for a very long time, and the day finally arrived. My guest for this episode is none other than the real estate investing (and training) legend, Ron LeGrand. If you’ve never heard of Ron LeGrand, it may be because you’ve not been in the business very long, because sooner or later you’ll run into someone who has studied under this man and has benefited from his expertise.

Ron LeGrand started out in the business in 1983, and is still doing deals today. He became a legend mostly due to his penchant for training others. Early on, he began creating training materials and made them available to up-and-coming investors. This, plus his now-famous weekend seminars, has been responsible for the success of many.

As Alex and I interview Ron, it becomes even more obvious how knowledgeable he is about this business. His passion has never waned. He tells that he’s been through 5 major real estate cycles in his long career and was able to buy houses and make money no matter which point the cycle was in.

Ron was one of the earliest gurus to begin using systems and outsourcing to cut down on his workload. His motto: “The less I do, the more I make.” At this point in his career, he works about 5 hours a week and buys 2 to 4 houses a month.  And he says he does only one thing — makes decisions.

You’ll hear the details of many of Ron’s successful strategies — especially how he puts together his lease option deals. The amount of the option deposits he pulls in is astounding.

At the close, Ron announces details of his upcoming Annual Summit held in January at Daytona Beach.