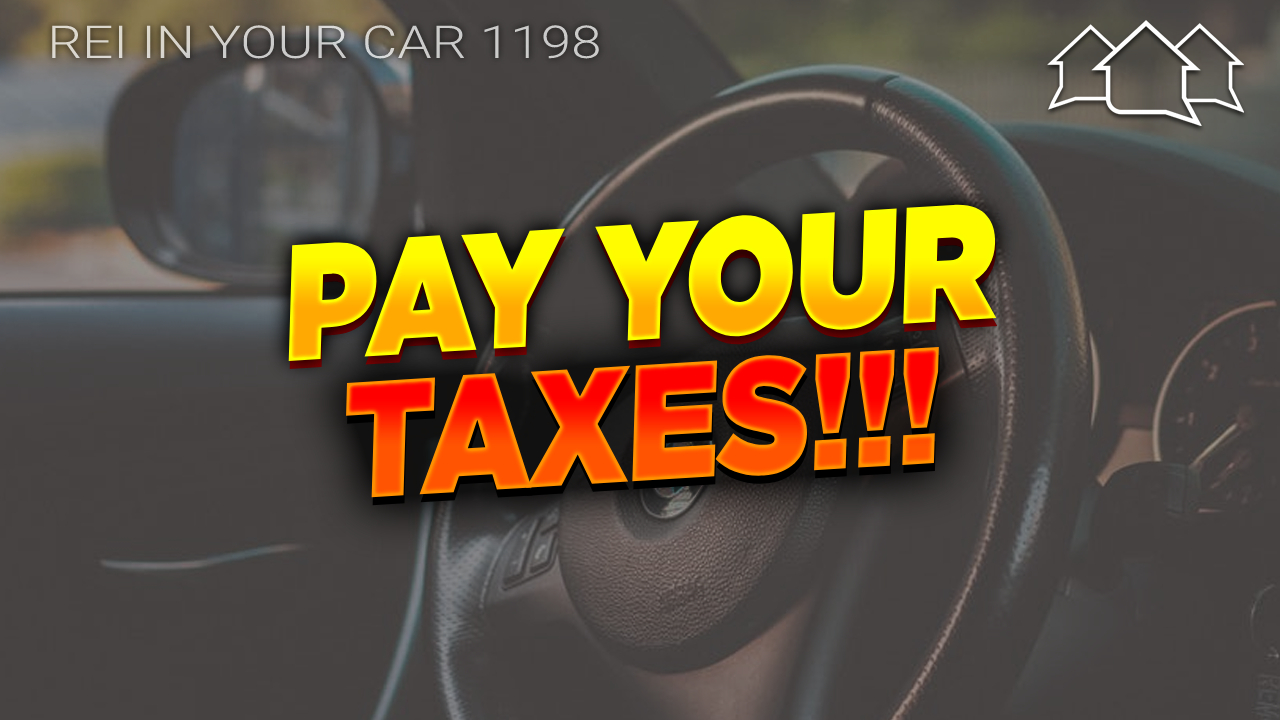 Once you start making some money in your real estate business, it’s easy to fall into the trap of figuring out your taxes later. Unfortunately, doing so puts you at risk of owing the tax man some serious cash. Even if you file an extension, the following tax year will roll around and you’ll owe even more. It can be tough to get out of that hole once you’re in it. I know from firsthand experience.

So what can you do about it? Well, I recommend everyone get their hands on a copy of the book Profit First and implement the strategies inside. No matter what you do for a living, you have to pay the tax man. Take care of all outstanding bills, debts, and taxes, and use whatever you have left over to invest more in your business or take that well-deserved vacation. Don’t be a checkbook business owner like I was. Make this new year a profitable one without stress.

Joe: Hey, this is Joe. Welcome to REI in Your Car Podcast. Just worked out this morning, my son went with me, my 17 year old, and we went out to breakfast. I’m just sitting in the car waiting for him. He had to go to the bathroom. But anyway, I wanted to tell you guys something. There is somebody listening to this right now who has not been good with their taxes. There’s somebody listening to this right now who you just keep on putting it off, right? You’re making some money, you’re doing well, and you’ll figure the taxes out later because when that check comes in, you’re making some dollars, man. You got things that you need to spend that money on, right? You’ve got bills to pay, you’ve got insurance to pay, you’ve got debt you’ve got to pay down. The last thing you’re going to think about when you get that $10,000 check from that deal or that consulting client that you just signed up or something, the last thing you’re thinking about is setting aside, you know, $2,000 of that $10,000 for the tax man. Right. You’ll figure it out later. So then come April 15th or whenever taxes are due, you file an extension, right. And you file the extension. Three months later, you’re working hard trying to figure out how you’re going to pay this $50,000 tax bill. And then you come up with the $50,000 to pay the taxes after you file one or two extensions and you’re like relieved, you know, but then guess what happens in a couple, three or four months after that, you have your next tax bill and all that extra money you made. You know, if you had a $50,000 tax bill, you made an extra $50,000, guess what? You have to pay taxes on that as well. Right. And did you set aside the i don’t know, $10,000 in taxes that you owe on that 50 grand, did you? No, no, no, no. You probably didn’t because you needed all that money to pay the previous year’s taxes. And then it just keeps snowballing and snowballing from there.

Joe: So what do you do about it? Listen, I’m speaking from experience and I was just talking about it this morning at breakfast with one of the guys that we were working out with who also is part owner in a small business. And we were talking about this book, Profit First. My son’s coming in the car here. We were talking about this book Profit First, and it just brought up so many things and memories. A lot of you guys listening to this, you’ve heard of the book Profit First and maybe you’ve read it, you know, like me, I’ve kind of read it. I read half of it. I kind of understood. And I thought, okay, I’ll get to that. That’s a good idea. It sounds good, but I didn’t really understand the importance of it. So I just wanted to leave a quick little message. This will be a short podcast that if you have not if you’re making money right now in real estate and if you it doesn’t matter if it’s real estate or not, maybe it’s you sell software, maybe you have it done for you marketing service, maybe you’re a realtor, maybe you’re selling widgets, you’re selling potato peelers. I heard of this one guy. There’s a 60 minute special on him and he’s is a guy in New York City that for, you know, 40, 50 years he’s been selling potato peelers and the guy’s a multimillionaire. Right? So no matter what you’re doing, if you are making money selling stuff for services or doing deals, this is important. You need to understand this and you need to hear. And if you’re not having this problem now, you will soon. You’ve got to pay the tax man. You’ve got to pay the tax man. You’ve got to set aside every dollar that comes in. You need to set aside money to pay the tax man. So the book profit first just real quick. Most people look at, you know, when you make a dollar, you take revenue minus expenses equals profit. That’s typically the way that you are taught how to run a business accounting wise in business school. Right. And there is nothing wrong with that except. It’s a horrible idea. The real way it should work. If you want to stay out of trouble, if you want guaranteed profits, whatever business you’re in, if you want it to always be profitable, which is our goal, right? You need to take revenue minus profit, minus taxes equals expenses. Your expenses need to be the bottom number that you’re looking at every single month. Every single week. Write that number that you’re looking at. Okay. Well, I made ten grand. I’m going to take out $1,000 for my you got to pay yourself first. So you take out $1,000 for your own profit, your future investments and things like that. You put that in an IRA, you put it into a savings account or you put it off. You know, you do something with that, and then you take another thousand, 1500 dollars, $2,000 and put it into your tax account. Now, if you’re like me, I put myself on payroll, so I pay taxes every two weeks. Federal, state taxes, state taxes. If I go on Social Security and all of that stuff that gets taken out of my paycheck every two weeks, so it just happens automatically. I don’t to worry about it. And then we also pay quarterly taxes because we finally a few years ago started implementing profit first, right? So you take that stuff out and then whatever is left is what you can use for expenses to run your business for marketing or whatnot. Right. And again, so what most people do when they do deals, they make 5000, $10,000 on a deal and you just spend it. You know, you’ve maybe you’ve been paying a bunch of money towards marketing and you’ve got a, you know, $3,000 credit card bill. So you take that five grand and you pay off the credit card or you take the money to pay your mortgage and rent. Maybe you go on a nice vacation, you need a new massage chair and you go buy it, right? And then you don’t think about, well, I got to pay taxes on that $5,000. It just came in. What you need to be doing is if you do a $10,000 deal, you need to take 1000 out of that. I’m just using simple round numbers here might be more or less take $1,000, put it into a profit account. That could be your retirement or savings or just like your profit account. Then you take another 1500, let’s say $2,000 and put that to a tax account to pay your quarterly taxes, which you should be paying quarterly. Right. I used to just pay taxes annually after filing two extensions and then I would just keep receipts kind of in a shoe box. Right. And then I would take my bank statements and just give them give my bank statements on my box of receipts to an at every year and just pay them a lot of money to figure it out and figure out my taxes. Well, that’s a stupid, dumb way to do it. And that got me in big trouble.

Joe: But anyway, so now you get that ten grand. What do you have left? You have about 70 $500. But who thinks that way? You’re a small business owner, man. You get that $10,000 check. You need all that $10,000 because that’s going to tide you over till your next deal or whatever. You keep that. You got to read this book profit first because you can’t think of that. $10,000 is all yours. It’s not. You have to set aside 20 $500 of that ten grand to your profit account and your taxes. Super important stuff to understand. And so I just wanted to share this with you because if you have not read the book Profit first, do yourself a favor. Go get it right now and don’t just read it. Read it twice and then implement it then. Depending on how good you are with numbers, not all of us entrepreneurs, small business owners are good with numbers. And if you’re not good with that and don’t think that you have to do it, hire somebody who is. I think Mike Michalowicz wrote the book. I think he owns a company where you can go and hire Profit First certified accountants and bookkeepers. Also, there’s a guy Richter shoot, I forget his name. He wrote a book and he kind of I think he coauthored it with Mike Michalowicz. It’s but it’s a book on profit first for real estate investors. And I forget his first name. He’s been on my podcast before, super nice guy. But if you go to Amazon, do a search for profit first for real estate investors and his last name is Richter, really good book. You should read it. And I think he has a company himself that will he does work using the profit first strategy for real estate investors. I’d encourage you to go check it out.

Joe: Don’t be like I was for many years. A checkbook business owner, you know, like a checkbook accountant, somebody that you don’t when you need money, you look at your checkbook and you say, all right, well, I got money in there. I’ll just go buy my new computer. I’ll go buy, like, business stuff, right? Like I can go. I got 5000 here. I can go spend $5,000 in marketing to get more leads and get to do more deals. That’s a that’s not how you need to do it. That’s not how you look at things. All right. So I hope that helps. Do yourself a favor. Make 2023 a profitable year without stress, without pain and heartache. Read the book right away. Profit First, read it again and go implement it. And if you’re not good with numbers, hire somebody who is to do it for you. You’ll thank me later. All right, see ya. Bye bye.