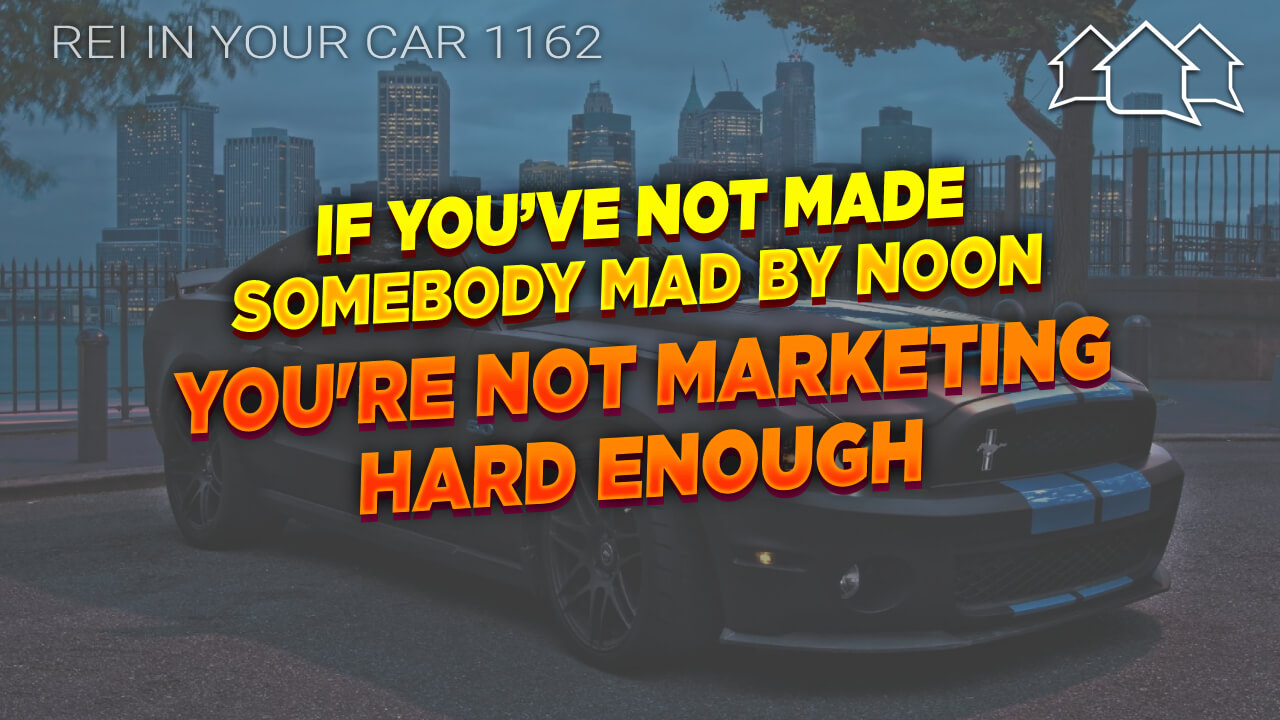 I feel like I talk about this topic a lot, but you really should be making so many offers that you get yelled at often. Some of my students are more sensitive than others, and I used to be that way too when I was just starting out. However, the truth is that you’re in the real estate business to make money, you’re not here to make friends. Sometimes you’re going to make a seller mad and they’re going to get nasty with you. But you have to push through to get those deals done.

Fortunately, there are ways to go about your sales and marketing without being a jerk, and in this episode, I’ll show you how it’s done. Sometimes, sellers just need time to cook. They need time to think about your offer or go get a second opinion. Many times, they’ll come back three to six months later and change their mind. So don’t be afraid to keep going. If you haven’t made somebody mad by noon, then your offers are too high.

Mentioned in this Episode:

Joe: Hey. What’s going on, Joe? Joe McCall here with REI in your car. I’m doing this. A lot of my podcast videos are kind of like me doing a video for YouTube, and then I’m taking the audio of that and putting it into the audio podcast. You guys who like to listen to the show can listen in on the videos as well, right? But sometimes I like just doing special audio podcasts for you guys because I like you guys. I mean, if you really you want to know something, don’t tell anybody. Don’t tell the guys on YouTube. But you guys are my favorites. My audio podcast listeners are my favorites. I like you guys better than the video guys. Oh, anyway, I like my video guys too, if you’re one of them. But anyway, I wanted to talk about and I talk about this a lot. I feel like I beat it like a dead drum. But it’s important to know and it’s important that you don’t forget this because this is a real common thing that I get with students that we’re just beginning here. What’s the best way to say this? If you’ve not made somebody mad with you by 12:00, you are not marketing hard enough. In other words, like you should be making so many offers, you should be getting people yelling at you all the time.

Joe: So some of my students are just more sensitive than others, and I used to be that way and just kind of like, Oh man, I don’t want to make anybody mad. And so when I’m in this kind of relates to the last podcast I did where, you know, you’re looking at I can make an offer for ten grand or five grand and you’re afraid to make an offer for a vacant lot at five grand because you know, it’s going to make the seller mad. They’re going to get they’re going to get enraged and they’re going to call you all kinds of names and get real nasty with you. Well, you got to do what you got to do. You make you’re in this business to make a profit. If you want a friend, go get a dog. I think Harry Truman said that. Right. So you’re not in this business to make friends. You’re in this business to make money. You’re not here to make friends. And if you know, if you want to make friends, this is not the business for you. You got to understand that. So sometimes in sales and marketing, when you’re when you’re especially in real estate, you got to go for no. And you can do without being a jerk. You can apologize. And when they mad, you say, Man, I’m so sorry. There must be something there must be something wrong about numbers. I don’t know what it is, but tell me if this is such a ridiculous offer and I’m sure it is, what do you think your property’s worth? No. Just ask him. Apologize. Blame it on the numbers. Blame, you know. Boy, I must have looked at the numbers. Wrong. My virtual assistant must have looked at the numbers wrong. But explain to me why you think this offer is so bad. You know, I’m sorry. Right. But without being a pushover. But I’m just trying to, like, get them to acknowledge. Like, I want them to tell me what they think their properties were. And then when they do, I’ll say, you know, okay, I get it. Yeah. But you know, I’m looking here and I see some similar properties that are currently for sale for this and I see some sold here that are sold for this. Why? Why do you think your property’s worth so much more? You know, it probably is, but just I’m just curious why. And sometimes I’ll even turn it around to the sellers if I am talking to them. And I don’t ever even talk to them on vacant land. But I’m like, you know, tell me something. If you were in my shoes, would you think that was a fair price? Would you buy this vacant lot or this house for that price and see what they say?

Joe: But here’s the thing, too. Sometimes sellers just need time to cook. They just need time to think about it and realize that property’s not worth as much as they thought it was. You know, they’ll go out and list it with an agent, and then that agent will tell them whatever they can, tell them whatever they want to hear just so they can get the listing. And then 3 to 6 months later, when they’ve had no interest and they’re like, Oh man, I don’t know what’s going on. The realtor says, Hey, you know what? You’re just asking too much. And then the seller gets mad because they’re going to be like, Well, you told me we could sell it for this. Whatever. And especially with this economy that we’re coming into, things are really slowing down. We’re seeing a lot of price drops, a lot of frustration. So sometimes you just need to let the sellers give them time to cook, to realize their property is not worth as much as they thought it was. And because you have been following up with them and nobody else does, even in a competitive market, because you know the numbers, you know the law of averages, and you know that on average it takes 7 to 8 touches over 2 to 3 months, sometimes four months to get a deal under contract. Because you’re persistent, because you follow up, right? You’re going to get more deals in everybody else. So, you know, this whole thought process kind of came to me because one of my students is like kind of panicking a little bit. Like he worked real hard to send these offers and all four were rejected. And not only were they all rejected, according to him, all four of them were really upset with him. And so they got this message saying, I sent all the offers and they’re all mad, and they all said no. And I forget what else he said. But he was kind of upset and I was at first I kind of freaked out. I don’t know how many did he send? And he responded back. He only sent four. And I was like, Would I kind of gave him a hard time? I was like teasing him a little bit. It’s like you what? You only said four. So I suppose you’d want them all to be, like, really happy with your offers, right? Like you would want them to all accept your offer and say, what a wonderful, awesome guy you are. And you would. You should have sent offers that they would have all accepted. Right? Because then they would be happy. And that’s all that matters, right? You know what I’m saying? But that’s not the point. We’re not in this business to make people happy. SELLERS Really? I mean, kind of, you know, we don’t want people we don’t like people be mad at us. But like we’re in this business to make money. Ethically right? With integrity. So, you know, you’re not going to make money by making all every seller happy and giving them whatever price they want. Because, yeah, you could have made offers that they said yes to, but then he would have lost money and then he would have had to go back to them and apologize, cancel the contract, renegotiate a new price or whatever, which would have been worse. So you make your profit when you buy, not when you sell. So sometimes you just need to go for no. If you know that for every 30 no’s you get, you’re going to get one. Yes. And I’ll tell you what, I want to get as many no’s as quickly as I can, because I know after my 30th. No, I’m going to get a deal. Now, it may be like you get 60 no’s and then all of a sudden you get two yeses. So on average, it’s one yes for every 30 no’s. But like, man, don’t get discouraged, don’t quit, don’t give up, don’t be upset if people are mad at you. I know it’s no fun, but. What’s the alternative? Want them all happy? You want to lose money? You’re not a charity. Right.

Joe: So don’t be afraid. If you get if you’ve not made somebody mad by 12:00. Right, then your offers are way too high. That’s about all I want to say about this. I think I made my point. If you’d like more information on how I actually make offers, I walk through it all step by step in a detailed video that you can watch as my class at simple land class dot com simple land class dot com. Go check it out. It’s free. And if you go there, you should get my mind map. I have a mind map of the whole process and you can take that. Actually, it’s a real webinar. Like, I really teach you some stuff and you’re going to learn. And even if we decide not to work together, you’re going to learn a lot from the webinar. And I’ve got something really cool that I do on that webinar. I will give you the money back if you complete the course. So I’m actually going to pay you to learn how to invest in land. And why do I do that? Well, I’m hoping some of you guys bring me deals. I only partner with students on deals because I don’t want to have to reteach it every time to everybody. So you have to invest in the course and then you learn the right way to do it. But yeah, so if you complete the course, set up the systems and show me that you do it, you if attempted it and made at least I think whatever it is, 25 offers, 25 written offers. I’m so confident it’ll work. I will give you your money back. You don’t even have to do a deal. So. Good. Check it out. Simple land class dot com. All right. Peace out.