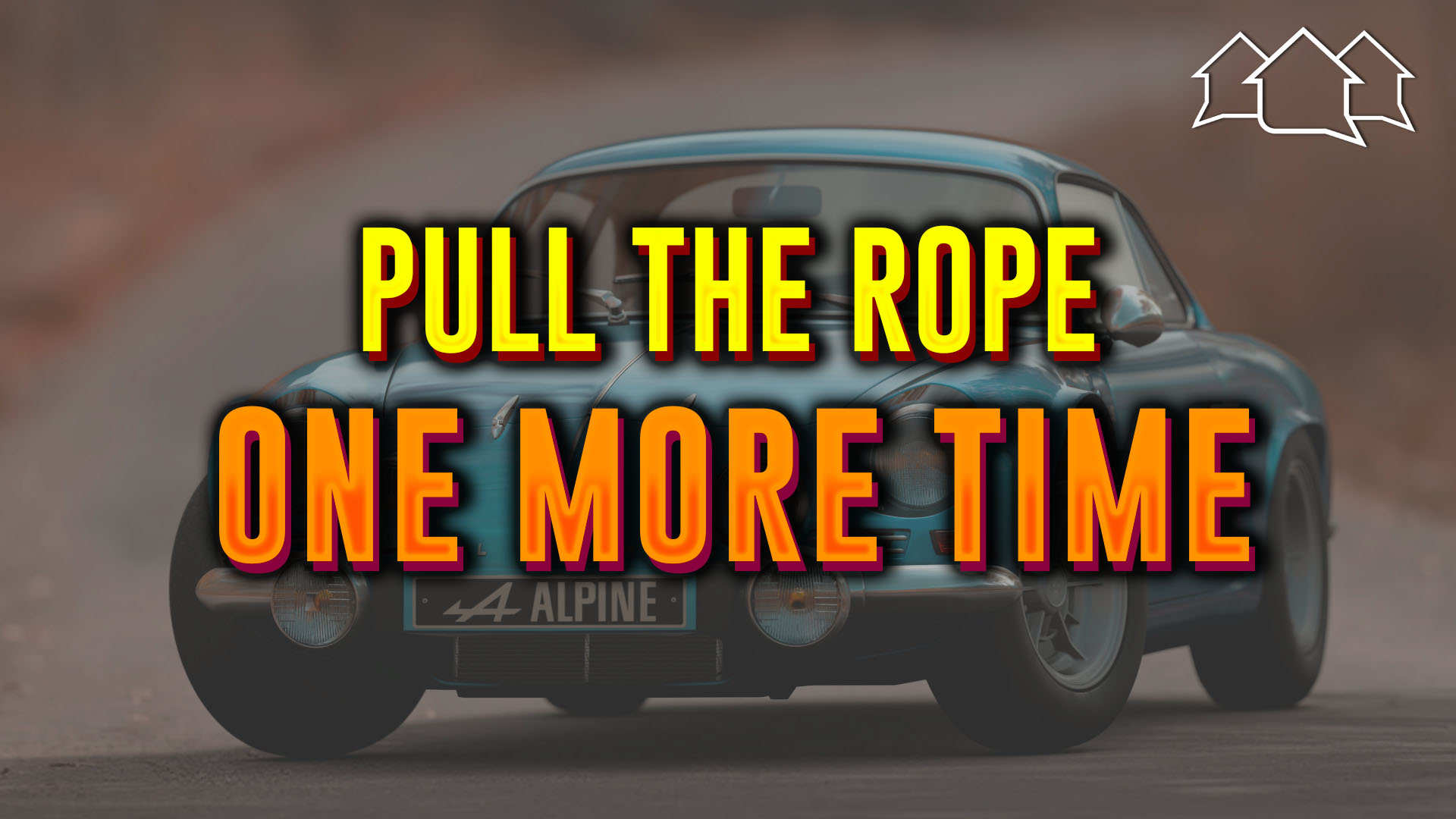 My new favorite exercise at the gym is climbing the rope. It’s a great workout and really gets the burn going in your arms. Just when you think you can’t pull anymore, you check the clock and see that you have 30 seconds left. You gather up your strength and try to give it one more pull. And it makes me think about building a real estate business. There are times when you’ve been on the phone for hours and you feel like you don’t have anything left in the tank. But you keep pressing and get a couple more calls in before you hang it up for the day.

Exponential results often come from those little extra pushes. Those pushes add up over time and the next thing you know, you’re starting to see consistent deals come through. It’s easy to get exhausted when you’re first starting out. There will be days where you’re sick of the grind, but if you just put in a little bit of extra effort every single day, those efforts will pay off in a big way.

What’s going on, guys, Joe McCall here, this is the Real Estate Investing Mastery podcast. And this is me talking from my car while I’m driving home from the gym. So I wanted to talk about climbing the rope and the idea of climbing the rope. It’s my new favorite kind of exercise at the gym for various reasons. It works out your arms like your entire arm and it gives you good cardio. And it’s this machine that as you pull the rope, you know one hand over the other down, it’s on this wheel. That’s kind of like a resistance. We also it’s harder sometimes the harder that you pull or the fashion that you fall. And this thing, it just it just burns your arms up, which is amazing and it gives you good cardio workout. So by the end, we usually do three sets a minute each, and by the end you’re just huffing and puffing and your arms are like on fire, which is, you know, good for working out, right? Well, anyway, as you do this, you trying to do it for a minute and you’re looking at the clock and you see you’ve got 30 seconds left and you’re just dying and you’re like, Oh, OK, go, go, go. And you’re just one more pull, one more pull, and then you’ve got 10 seconds left and you’re just counting it. But you’re not slowing down, you’re just pulling and pulling and harder, you know? So it’s like this. And when you have friends with you two, by the way, it helps. And the last usually five seconds or so you’re you’re just pulling hard as you can, as fast as you can.

And it’s a great workout, right? And I think about this a lot in terms of real estate because so many times and I’m sure you can relate to this. You know, you’ve been on the phone for two hours already calling sellers back, doing cold calling or whatever. And you’re just like, you’re tired and you’re done. But you know what? Just one more dial. In fact, maybe two more tiles. Maybe you are on the MLS. You’re looking at properties and you’ve already sent like five offers and you’re just like, Oh man, I’m tired. I’m done. No, no, no. Just two more offers just two more. Just like five more seconds, ten more seconds. You can do it well if you take this and start putting it into your business. I’m telling you you’re going to see exponential results because I’m not talking about like working really, really hard. I’m talking about just putting in that little bit of extra work, right? That that slight edge that’s going to just push you past a little bit past your comfort zone. And then guess what happens the next time you pick up the phone to call sellers or you cold calling or you’re texting or whatever you’re doing, right? It’s like not a big deal to do it for two or three hours. Here’s the point. Also, you know, if you’re doing cold calling, which is for us in the house side of the business is one of still the best ways that we’re finding deals for vacant land. It’s direct mail, but if your house is cold calling right on average, guys, you need to be dialing at least two to three hours a day every day for three months before you start consistently seeing deals. I mean, that’s on average. Eventually, maybe you want to get to a place where a virtual assistant is doing it for you. But you know what? What is that when you’re depending on the dealer? If you’re doing one at a time, like with freedom soft or you’re doing a triple dialer with mojo or batch or something like that, right? So it kind of depends on how many dials. But let’s just say if you’re doing a triple dialer, it’s 200 phone numbers a day. If you’re doing single one offs, maybe it’s 75 dials a day or something like that, but you get in the habit of doing that every single day and it gets easier. It gets and you get better at it, you get more effective with it.

And so when you’re calling sellers, you’re calling realtors and you’re tired, you’ve already. And sometimes when you first start out, you’re just going to get tired and exhausted. You’re going to get sick of it after just one or two sellers or realtors that you talk to. But if you just put it in the in your head, OK, I’m just when you’re tired and you’re done, if you can just do one or two more, you’re you’re exercising your sales muscle. It’s going to get stronger, you’re going to get better. And then the next time you do it, you’re going to call for realtors and you’ve got to dial just one more and you’re going to dial five. Then the next time you’re going to call five, you’re just going to do, I’m going to do one more and you’re going to dial six. And then here’s the cool thing to the better you get at talking to sellers, whether it’s cold calling or realtors or property managers, the shorter your conversations are going to be. So you actually can make more deals in the same amount of time because you’re learning how to. Say the right things, you’re learning how to ask the right questions. Build rapport quicker, you sound more confident on the phone and you’ll just do better because again, bottom line, if you’re not on the phone, you’re not making money in this business. I know a guy who and I talked about this guy a lot. I’ve never met him. I’ve heard about him here in St. Louis, and he’s kind of a hermit. You know, whenever he needs some money, he comes out of his cave and he has a Rolodex of a couple hundred property managers, realtors, wholesalers, anybody in the business. And every month, a couple of months, he comes out of his cave and he dials every single person on that list and he asks them two questions. Number one, do you have any deals you’re looking to sell? Or number two, are you looking to buy any deals? So do you have any deals to sell or are you looking to buy any deals? And inevitably, every time he goes to that list and just calls everybody and texts right, he finds somebody that has a house they want to sell. They’re looking to get rid of. Maybe it’s an off market property. Maybe it’s a market, a house that is on the market, but the seller is getting motivated, and he finds somebody else who was looking to buy that deal. And he puts them together every single time. He puts a deal together and makes five or 10 grand by just calling people, getting on the phone and talking to them. Do you have any deals? Sometimes I find deals that I don’t want. Are you looking to buy any deals? What are you looking for? Do you see the power of the phone, especially when you start having when you start working old leads? All that’s money right there.

In fact, some of the best the best list that you can ever get your hands on is a list of dead leads. So if you don’t have any dead leads, find another investor or a wholesaler who’s done a lot of marketing, who does have old leads and just offer to do the follow up for them. Call them up, say, Hey, listen, I’ve got some time on my hands. I don’t have a lot of money. I’m good on the phone. I make a lot of phone calls. If you have some old leads, I’ll follow up with your old leads and if I do a deal, then you can pay me out of the profits. You know, if you’re just getting started, maybe 30 40 percent of the profits, once you get more season, you get better at it, maybe 50 percent of the profits. So my point is, again, just one more dial just called to more realtors. Don’t quit, don’t give up because it’s going to happen. You’re going to be getting better and better and better at it. You’re going to be getting stronger, you’re going to be getting becoming more efficient and you’re going to find that, you know, instead of the the 10 realtors that you used to call before, now you’re calling 15 or 20 and it’s not as big of a deal. All right. That’s all I wanted to say. Go climb the rope. Make it happen and make some. Make some deals. Make some calls. Talk to some sellers. Talk to some buyers. Go climb that rope. We’ll see you guys. Bye bye.