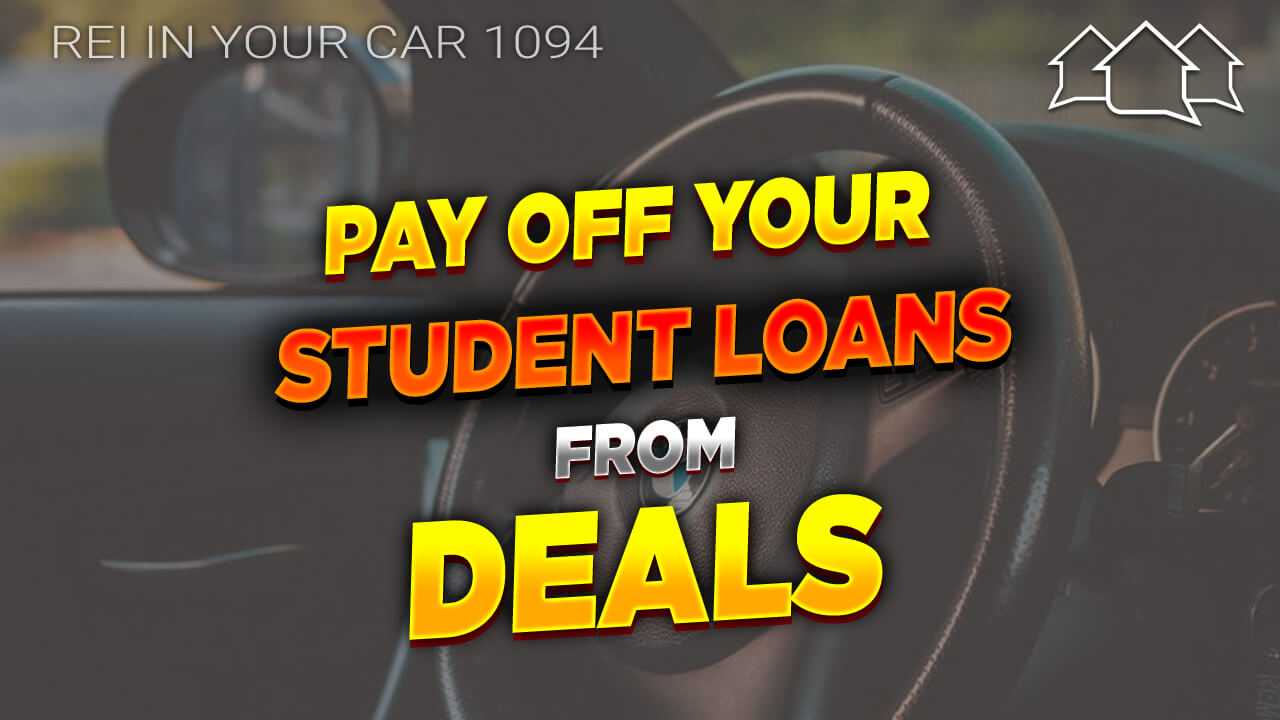 I recently heard that the moratorium on student loan payments was extended until May, when it was supposed to expire at the end of January. The average student loan debt is about 30 grand, with the average monthly payment being somewhere around $400. Eventually, they’re going to come due, and we’ll have to face a day of reckoning. Even if they forgive the debt for everyone, we’re going to pay for it in some way, whether it’s through inflation or higher taxes.

One of the best ways to pay down student loan debt is by doing real estate deals. Strategies like lease options can get you regular monthly cash flow that you can turn right around and put towards your payments. Relying on the government or stressing out because you don’t have enough money takes a toll, but real estate deals can help with that burden. It can also help you avoid student debt altogether if you finance your dreams with deals instead of borrowing.

What’s going on, everybody? Joe, REI in your car, I hope you’re doing well. Just driving back home from the gym and having breakfast with some friends, there’s a great place in St. Louis, by the way, if you are ever in the St. Louis area near what is it, Baldwin Chesterfield area called the Wolf. So if any of you are ever in St. Louis, you should go to the wolf. And they just have a really good breakfast and good coffee. Anyway, I was listening to the news NPR specifically, and I sometimes, well, never mind. I won’t get political, but I do listen to NPR sometimes just because I like hearing the other side of the stories, sometimes because I lean politically more right. But I like to hear you just hear stories that you don’t hear on the other radio stations. And then I get annoyed with everybody. And I hate talk radio for a few months, and then I start listening back to it again.

But anyway, OK, just on my point. The point I was talking about was President Biden, whether you believe agree with him or not. You know, whatever. He just extended the moratorium on student loan payments. It was supposed to expire. People were supposed to start making payments again at the end of January, January 31st. Now he’s extended it to the end of May or something like that. So he’s pushed it out five months or something. And man, I’m just thinking about that. You know, the average I did some deep scientific research on Google and the average student loan debt is about 30 grand and the average student loan monthly payment is $400. OK? And I’ve been thinking about that like they’re just kicking the can down the road. And one of the reasons why our economy has been propped up is not just the stimulus payments, right, not just the government handing out a bunch of money and printing a bunch of money. And you know, we’re going to we’re going to have to pay for that somehow some way, but also the suspension of student loan debt. And so people are getting money from the government, but also not spending any money toward student loan payments. Well, there’s what’s that phrase. Even when the chickens go out to roost or something like that, there’s a phrase, you know what I’m talking about? We’re going to have a day of reckoning with all of this stuff, right? Like when student loans payments actually start coming due. You know, I know some people in the government would like to just magically wave a wand and make all of the student loan debt disappear. But that’s that’s going to that’s going to be a huge disaster. So hopefully that doesn’t happen. But here’s the point I want to make. I have student loan debt. I’ve been rapidly paying it off, but I got stupid. I got a stupid degree. And you know, it’s like if the interest rate is so low and I get to write off the interest. Yeah, I’ve not been in a hurry to pay it off, but now I am, and I’m going to have it all paid off in a couple of years. But man, it’s frustrating, right? And I’m in a good spot where I can, you know, pay it off. Like I’m paying four or five times my monthly minimum monthly payment. And I have been paying it during the last year or so that the payments have stopped. So the nice thing is, I’m not I don’t think it’s accruing any more interest. I think the interest is set to zero. But anyway, I’m rapidly trying to pay it off.

But there there’s a lot of y’all listening to this and you’re worried about making your loan payments. Maybe your loan payments are only 100 bucks a month. Maybe they’re $500 a month. Some of you have loan payments of seven hundred and fifty, two thousand dollars a month. And what are you going to do about that right? And you’re worried about it? Well, here’s the crazy, awesome thing about real estate now. Whether you’re doing lease options or buying hold or vacant land flipping you, there are strategies out there where you only need to do a couple deals and sell them on a lease option or sell them on owner financing or something like that. And you can use that money to make your student loan payments. I mean, wouldn’t that be nice if you just could do a couple of lease options that gets you three hundred each in cash flow? So let’s say five, six, $700 in monthly cash flow and just have that money go towards your student loan debt. Wouldn’t that be nice? Right? And oh, hold on. My kids are hunting. No, they’re done, OK. So I’m driving down my driveway and I was looking for my sons there, hunting deer with crossbows, and I want to make sure I’m out of the line of fire in any way. Wouldn’t that be cool? You wouldn’t have to worry about those monthly payments. And so here’s my short advice to you, right? Like, stop sucking on the government. You know what? Right? And start taking your own economic well-being and financial health into your own hands because. I wish I could think of that phrase, I should have looked it up. The paper is going to pay or play or you know what I’m trying to say, right? Like it’s going to come is going to be a day of reckoning. And you’ve got to be ready for it. And one of the best ways is like, Man, just do a couple deals to get a couple of lease options, buy some vacant land for five 10 grand and then sell it on owner financing. I just interviewed Phil Marsh on my podcast and he in the last year since. So for 11 or 12 months now, he’s been just buying and flipping vacant land, buying it for 20 25 cents on the dollar, selling it on owner financing. His average note is about $400 a month, and he’s getting he just surpassed the $10000 a month in passive income mark. All right. Imagine having $10000 a month coming in every single month without you having to do anything for it, like after you get it right? Well, how fast and how quickly could you pay off all your debts with just that? You know, if you have student loans, you just need to do two vacant land deals, sell them on owner financing or do two sandwich lease option deals are due to subject to deals by some creative financing, you know, and you could use the cash flow to pay off your debts. How cool is that? That’s why I love real estate.

So anyway, I just wanted to talk about that. Number one, don’t get into student loan debt unless you absolutely have to, unless your degree is something that’s going to make sense. You know, if I my kids, I’m telling them, don’t go into student loan debt unless you’re getting a doctor degree or an engineering degree or something more. I don’t want to say useful because there are other degrees that are useful that. But anyway, what I’m saying is may I go to community college, like work through college, do whatever you can to get the least amount of college debt as possible, right? And then get into real estate, start doing deals and use the cash flow from those deals to start paying off your debts so you don’t have to stress and worry, or be you so reliant on the government to help you and bail you out because it’s going to come due and they’re going to start making the payments do. And then even if they forgave the debt for everybody, you know, I’m telling you it’s going to be paid for somehow somewhere some way through higher taxes, through inflation, through an unstable economy through, you know, probably have another recession or depression or whatever. So you’re going to pay for it one way or the other. Get your financial house in order. Go through Dave Ramsey or something and get out of debt. Get out of debt. Alright. And go do some deals. We’ll see you guys.