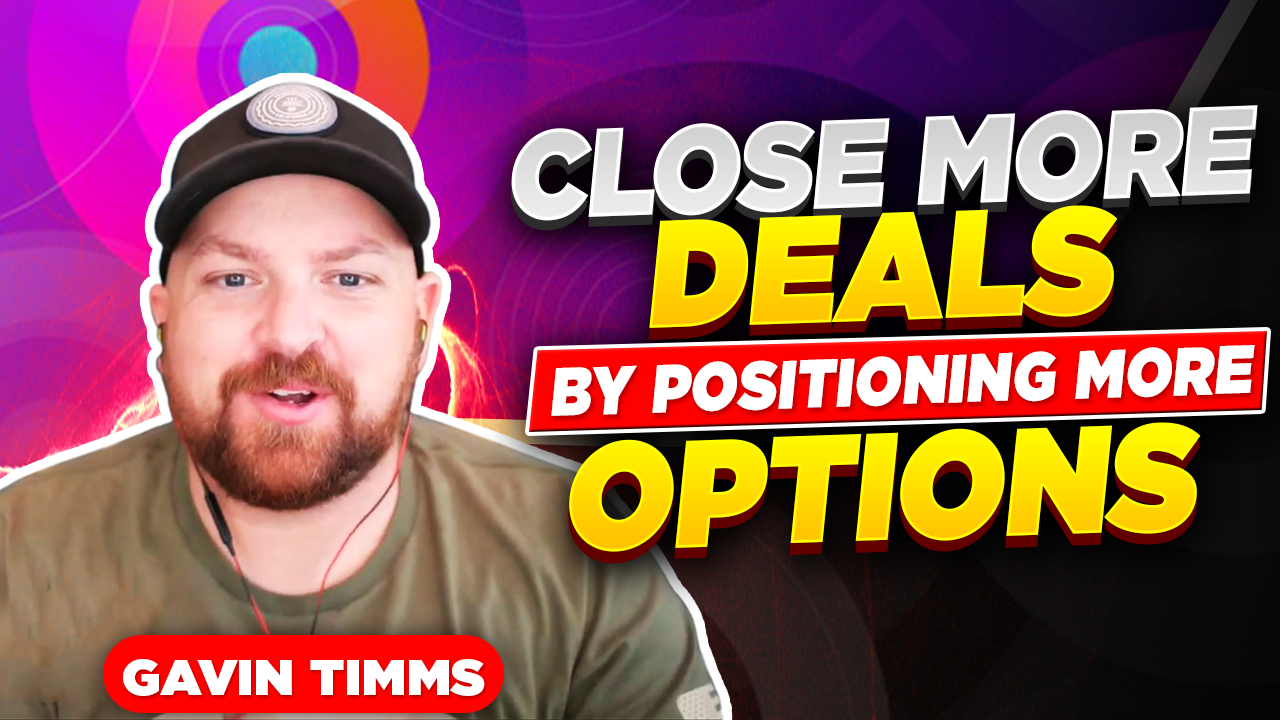 Gavin Timms is telling you how to get creative in order to close more deals. When you position more options, you’re more likely to find something that is going to solve the seller’s problem and make you money.

When you first start working on an offer, find out why the seller is selling. Get to the core of their problem. Is it the house? Can they not afford their payments? Is it just that they don’t want to deal with it anymore? Whatever their problem or reason for selling is, use that to your advantage when creating your offer. If you provide them with options that are going to solve their problems while closing the deal, it’s a win-win.

Once you’ve figured out their problem, keep asking questions and gaining more information. You are going to be repeating this information back as you present options to them. Once you figure out how much they’re looking for out of the deal versus what you’re willing to pay, you need to present this carefully and strategically. Prepare the seller for the low offer so that you can work more options into it.

After you’ve figured out the price they are firm on, this is where you start using options to solve problems. Whether it be owner finance, lease option, or even a subject to. Keep it simple, have your numbers, and don’t share too much about what you can give them. That’s the key. You’re not hiding anything, but you’re not sharing information that’s going to work against you in negotiations.

At the end of the day, what makes a closer a closer is the ability to find an option that makes a deal work, and not just giving up when you get a no. Use the word ‘no’ to be more creative in your deals. You can solve sellers’ problems while closing deals and making big profits.

Joe:  Welcome. This is the Real Estate Investing Mastery podcast.

Gavin:  Hey, guys, welcome back to the REI Network podcast. I’m actually back in my home office if you’re watching me on YouTube or you may be listening on the podcast, but I’m home. We’ve just been on, been away for five weeks in Michigan. We went into to the lake house, the family lake house. We can pull the RV just alongside the lake house. We stayed there for about three, three and a half weeks. And then we went up to the UP, which is the Upper Peninsula. I thought that was everyone knew that, but apparently not. That’s actually the Michigan language there. But, yeah, another beautiful place we did that came back just arrived back home a couple of days ago. And then we are heading over or down to Florida for a week on Tuesday. So a lot going on, a lot of travel. That’s why I love what I do. And to be able to make money in real estate and that’s what the show is all about, is trying to educate you, teach you, give you some action steps for you to take away and actually implement. Alright. So again, please reach out if you want to send me an email at support@reinetwork.com. If you have anyone that you want me to interview, if you want me to talk on any topics, teach on anything, happy to do so. So anything that you want or you’d like to hear, please reach out. Also, if you’re interested in working with me on a on a coaching level, also reach out as well as you get to REINetwork.com/join or if you want to work with me one to one, you can also email it. Alright. Awesome.

Gavin:  So let’s get into what I want to talk about today, which is about closing more deals by making more offers or having more options. Really, really important. And there’s so many people that get into real estate and they want to do creative finance. Right. You hear that term? We want to hear about lease option, lease purchase or subject to all cash deals. And obviously, I think it’s easy to say, like, well, I want to work on creative deals, somewhat passive income. I want to control property without owning it. And I want a rental coming in. And then everyone’s got all these different visions. But you have to pick where you want to learn and you need to understand not only where you want to learn and focus if you are new, how are you going to position these different offers to actually make sense and actually work and get contracts? OK, so if you’re new watching this, I want you to start with one strategy at a time. Right now, I like obviously wholesaling, starting with cash deals and then going into owner finance, especially if you’re brand new to real estate. Now, that doesn’t mean that you can’t do lease options or a finance if you are brand new. I’m not saying that, but I think it’s an easier way to break in to keep it simple, because on the creative side, you need to be more creative. You need to understand how to learn how to position your office position in the sales cycle. And I’m going to get into that and give you some examples that can be a little different. There’s more moving parts in a creative deal. And also the word creative is because you can do it one hundred, probably a thousand different ways to make a deal work. And the idea is, is that you’re solving problems and you’re making and creating a win win situation for both parties or everyone involved.

Gavin:  OK, so let’s run through a scenario of how we can make do more deals, close more deals by making more offers. Now, again, there’s two ways to do this. And you’ve probably heard this from me before, if this is a cowardly tone that’s not really interested in anything, the just about whatever you reached out, just make me an offer. You could put multiple offers on a page. You compare offers of meaning. You can make a cash offer with a lease option, maybe a sandwich lease option, staying in the middle of the deal on a sandwich lease option. That’s why you’re going to make money on the front. You’re going to cash flow and you’re going to make you have equity on the back end when you sell it, when you stay in the middle. So you might want to put that offer together. And then a third or fourth offer could be an assignment lease option or maybe an hour a finance or something like that. So you can start to put offers together on the same piece of paper. Now, obviously, that just said that to a non motivated seller. These are all talking points. So I don’t think you’re going to make this offer and all of a. And what if they accept it? Right. Are you talking to a number of a seller? You’re putting things on paper for your follow up, your your position, everything you do in your business is leaning towards the follow up as you go down the pipeline, as the lead gets hold. Right, though, ultimately, the better the lead if you’re following or you’re waiting for situations to change and then you’ll be able to lock up a potential great finance deal over a period of time by solving the seller’s problem. Alright. So let’s say that I get on maybe after done a couple call or texts, a direct mail, ppc, Facebook doesn’t get on with the seller and we’re having a conversation. I understand that this gentleman is a rental property and is now vacant and he just wants to get rid of it, but he doesn’t want to give it away. So that’s kinda what he is saying up front of this vacant house of property tenants just left? I don’t want to be a landlord anymore. I just want to I just want to get rid of it. But I’m not giving it away. Right. That’s what he says. So now we’ve got to push on them four pillars in that sales cycle and you can change the order of these. But you want to find out what the situation of motivation was going up. Right. We’re going to aim questions around what’s going on. We also want to aim questions regarding the. So number one is the situation motivation. Right. And these can go in different orders depending on the situation that you’re in. Also, the condition of the property, how much work, what does it need as it was the last time you have all the big items, the roof, last updated the kitchen and bathrooms, the AC unit, things like that. You’re going to have to condition the home and make sure you make notes on that timeline. How quickly do they want something to happen? I want to ask questions around that. And then lastly, obviously, the big one, which is the price. Now, what you’re doing when you get this information is you’re going to have to then play with this information and go in. Is it time? Is it speed? Obviously, the faster the the less you’re going to offer, the longer if they have time than not in a rush, you could get them more money. Right. So these are things that I’d be thinking as I gather this information. So this guy already told us that he wants to get rid of it. OK, he is tired landlord but doesn’t want to give it away.

Gavin: Anyway, hopefully this helps. I appreciate it. Good. So today I’ve got some takeaways. Remember, like and subscribe. If you can make sure you go to REI network podcast, REI Network with Gavin Timms. Give me a review if you can. Make sure you make sure you subscribe. Also my YouTube channel as well. Drop me a like if you got something from this, if you’re interested in working with me, you can reach out, support@reinetwork.com or go to reinetwork.com/join. Want to know if you want to do that, hit me up on my email. We’ll have a conversation. If not, stay tuned for the next video for the next guests. We’re going to keep bringing value. We have coffee with Closers Live every Wednesday as well. So you should check us out on that. That’s a lot of fun and I’ll see you on the next one. All right, guys, thank you. I have a good one. Bye bye.